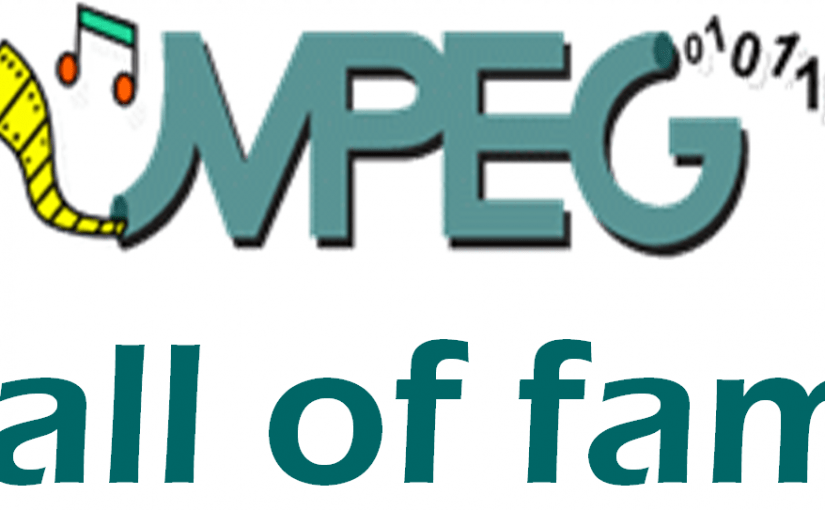 As MPEG is no more, it is time to open and populate the MPEG Hall of fame. It is not going to be an easy task because so many people have contributed to make MPEG what it was.

The MPEG subgroup chairs will not be mentioned here. They are in the Hall of fame by default because they have been among those most committed to the success of MPEG. If you want to know their names, responsibilities and years of services, please look here.

In this article I will mention some of those who made a particular contribution outside of standards development. If you think that someone whose name is not here should be added to MPEG Hall of fame, please send me an email.

Temporally, the first entry is Tsuneyoshi Hidaka. He took care of defining, planning, executing and processing the data of the MPEG-1 and MPEG-2 subjective tests carried out in November 1989 and November 1991, respectively. The execution part was particularly important because JVC had a recently built research lab at Kurihama with an excellent video quality testing facility. Without the benefit of Tsuneyoshi’s expertise and the access to testing facilities MPEG could very well stumbled at its first project because at that time it was an unknown group whose only asset was its plan.

The second entry of the MPEG Hall of fame is Ken Davies (CBC). Ken was a very respected participant in CCIR (now ITU-R) activities. He was the first to make available video test sequences to MPEG by giving access to the CCIR library. Two video sequences – “Table Tennis” and “Flower Garden” – were used and watched by thousands of people engaged in video coding research in the 1990s both inside and outside of MPEG. I am unable to tell the number of individuals and companies who permitted the use of their content – video, audio and, more recently, point cloud data – used to develop many MPEG standards since Ken’s first donation.

As the Hall of Fame attempts to list people in temporal order, it is appropriate to mention two figures whose support and assistance have been fundamental in the first 20 years of MPEG. They are Mike Smith, then the ITTF chief and Keith Brannon, his right hand. They both understood the importance of bringing the MPEG activity under the folds of ISO and both always available to help and solve problems. Today I would say: Quantum mutatus ab illo.

On a different plane is the role of another entry of the MPEG Hall of fame. Arian Koster was a young engineer at KPN Research who, one morning of July 1990, called me to make a suggestion: “What if MPEG developed a software implementation of the MPEG-1 standard?”. This was a radical new idea because at that time every participant in MPEG-1 Audio or Video had their own software implementations of the Video Simulation Model. His suggestion was the beginning of what became the consolidated practice of the MPEG Reference Software. Both MPEG-1 and MPEG-2 did not have significant examples of common reference software, but the practice took root with MPEG-4 and continued ever since.

On a similar plan I would like to propose another entry to the MPEG Hall of fame, myself Leonardo Chiariglione (CEDEO.net). In general, ISO standards do not make a clear distinction between specification (“the law”) and conformance testing (“the tribunal”). My job at Telecom Italia, however, made me sensitive to the latter because Testing Laboratories have always been part of the culture of that industry. MPEG-1 was a “telco – consumer electronics” project, hence it included an industry not very sensitive to formal conformance testing. Therefore, the adoption of my idea that there should be an ad hoc part of the standard that would serve the purpose of testing an implementation for conformance was not discounted. Conformance testing has been ever since a necessary component of all MPEG standards.

On yet another plane was the role of two other entries in the MPEG Hall of fame: Dick Green and Baryn Futa. Dick had worked at PBS had a long experience in attending ITU meeting. In 1988 he had established CableLabs of which he was President. In 1992 he visited my lab at CSELT (later Telecom Italia Lab) to know more about the MPEG-2 work and gave the task to Baryn Futa, CableLabs CEO, to take care of MPEG-2 IPR discussions. Eventually Baryn created MPEG LA (LA=Licensing Authority, no relation with MPEG) overcoming important legislative hurdles.Without a patent pool, MPEG-2 would most likely have never flown.

On yet another plane was the role of another entry of the MPEG Hall of fame, Pete Schirling. Pete worked at IBM and acted as US Head of Delegation (when we could still use that term). In July 1995 he offered MPEG to develop a system that would allow MPEG members to upload their documents and download other members’ documents. I believe that was the first system of this kind deployed for a standards committee, certainly for a committee of the MPEG size which was already hovering around 300. It took many years to get rid of paper, but after Pete’s system we no longer had examples of 1 million photocopies at the November 1993 meeting in Seoul. When Pete could no longer run the system, Wo Chang (NIST) took over. He redesigned the system and ran it for 5 years. When Wo left MPEG, Christian Tulvan (Institut Mines Télécom) took over, redesigned the system and kept on adding incredibly useful features that have made MPEG meetings constantly more efficient and enjoyable. Pete, Wo and Christian can deservedly enter the MPEG Hall of fame.

On the communication front, Pete Schirling (again), Arianne Hinds (IBM and then CableLabs) and Christian Timmerer (University of Klagenfurt) deserve to enter the MPEG Hall for fame because for many years in different periods, they collected and edited the main news and made them the press release of each meeting. Pete, Arianne and Christian have carried out the commendable and quite engaging task of chasing the chairs and extracting the news from them.

On the education front Alexis Tourapis (Apple) enters the MPEG Hall of fame because he shot and edited the video presentations made by MPEG members on different MPEG standards.

On the promotion front, Rob Koenen (TNO and then Tiled Media) and José Alvarez (Huawei) enter the MPEG Hall of fame because they accepted the challenge to be the heralds of MPEG industry liaison. They organised events at MPEG meetings and at several places in the world where they presented the MPEG work plan and asked industry representatives to provide feedback. Besides that, Rob took care of maintaining a visual representation of the MPEG work work plan at every meeting, like the one you find at MPEG status report (Jan 20202).

I am pretty sure I am forgetting worthwhile entries in the MPEG Hall of fame. If you notice one, please send me an email.