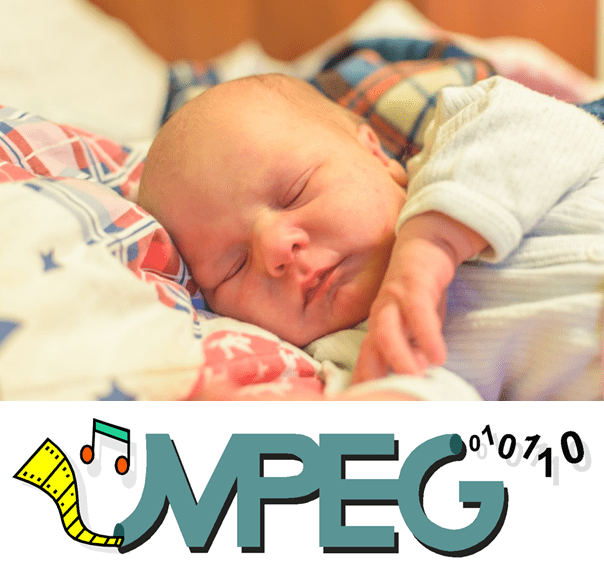 A star comes to light when the nuclei of the light elements atoms undergo fusion because of the enormous gravity force to which they are subjected. This process is also a fair description of how MPEG came to light as we will see in a moment from a summary of chapter 12 Think local, act global of the book Even the stars die.

The wave of digital technologies of the 1980s contained all the premises for another case of progress achieved at the cost of users. It was not to be so because a totally unexpected group – MPEG – changed the rules of the game. In an earlier post I compared MPEG with The Mule of Isaac Asimov’s Foundation.

MPEG did not abolish competition, it made it rational: why fight with the atoms (competition about which product should succeed in the market), when we can have a fight about ideas, i.e., the technologies used in the product before it is put to the market?

I always considered “in-interoperable-by-design” television as an insult to good common sense and a deprivation of the natural right of billions of humans to communicate without barriers, a right that article 19 of the Universal Declaration of Human Rights is about.

In the 1980s, I thought that, if the choice of incompatible analogue technologies had been used to create policy- or technology-based television walled gardens, we could use digital technologies to define a universal  format abstracted from the different low-level physical technologies. This would be welcomed by consumers because they could communicate seamlessly at the global scale and by manufacturers/service providers because they could reach a global market with their products/services.

The first challenge was to define a compressed format capable of coping with the limited bitrate offered by the phys­ical media available at the time. I had been hired to do research on digital video telephony and had been one of the first to do research on DCT applied to video compression. So, I knew only too well that efficient compression required complex integrated circuits.

Without a reference standard, however, there was no hope that the silicon chip industry would make the investments necessary to manufacture chips that were, at that time, out of reach of the industry because of their complexity. I thought that a coding architecture shared by different industries would drive the evolution of the silicon chip industry and accelerate the implementation of compression algorithms.

My idée fixe was to “share” the development costs of the integrated circuits, an idea planted in me by my personal experience of telcos’ reluctance to invest in terminal devices and CE industry’s readiness to develop products – provided a market existed.

The opportunity to put my ideas in practice was offered by the second European R&D program (the first was ESPRIT) called “Research & development on Advanced Communication for Europe” (RACE) that was launched in 1984.

Using my acquaintances and a considerable degree of gall, I put together the Integrated Video Codec (IVICO) consor­tium with a broad membership: some 20 European telcos, broadcasters, silicon chip and terminal manuf­acturers, and universities. As the RACE program was in test mode, the project had a planned duration of just one year after which it was expected to be funded for a full five-year period.

In a hindsight not surprisingly, the project was terminated after one year. The disclosable reason was the official European policy of the time that promoted the analogue D2-MAC and HD-MAC standards. Digital television, read the policy, would only happen “in the first decade of the third millennium”. The disappearance of the European TV manufacturing industry is one result of this insane backward-looking policy.

The other reason, internal to my company, exerted such a pressure on me that the MPEG star was born.

After the IVICO débâcle, I reassessed my strategy and came to the conclusion that, if the unfriendly European scenario did not allow me to execute my project of developing a European microelectronic technology for video coding, I could operate at the global level and so be shielded from influences and pressures of a non-technical nature from my own backyard. Of course, the project would no longer have industrial objectives, but a standard.

Chance helped execute the plan. IVICO was dead, but some 20 person-years of efforts had to be reported at a conference. The selected venue was Globecom86, in Houston, TX. There I met a group of old University of Tokyo friends, all former Ph.D. students like myself in the same time frame as mine. One of them was Hiroshi Yasuda who, after his Ph.D., had joined NTT where he was responsible for NTT Commun­ication Laboratories’ video terminals. He invited me to attend the Joint ISO-CCITT Photographic Coding Experts Group (JPEG) activities of Working Group 8 of TC 97/SC 2 of which he was the Convenor.

I did so also because my group at CSELT was a partner in the PICA project, an ESPRIT project led by British Telecom, put together to contribute to the work of JPEG. I attended the March 1987 meeting in Darmstadt and was favourably impressed by the environment. In July 1987, when one of the PICA proposals won the JPEG competition, I proposed to Hiroshi to create a parallel group to JPEG for moving pictures. In January 1988, I convinced him and in May 1988 I chaired the first MPEG meeting in Ottawa, ON. Twenty-nine people were in attendance, some of them curious visitors from the JPEG meeting next door.

How could such a disperse group of people become the mighty MPEG? The answer to this is a question that deserves more than one post.

The Genie that makes entertainment great