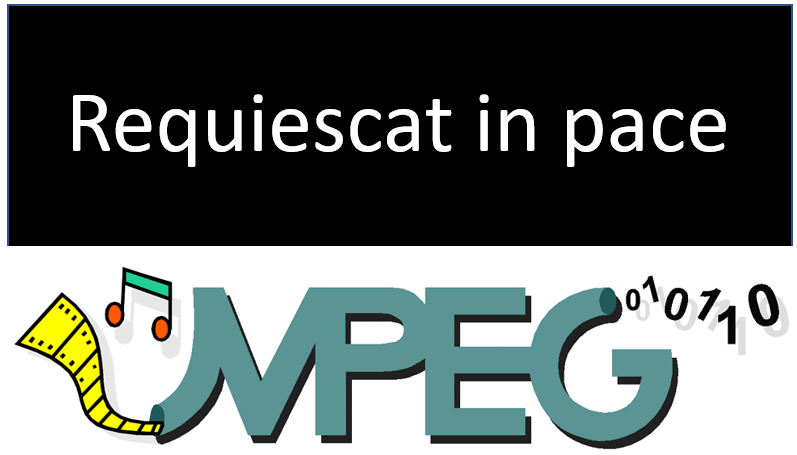 For 32 years, MPEG was a unique player in the standardisation space. Contrary to what had been the rule in previous decades, instead of being variously subdivided and controlled by governments, countries, industries and companies, media standards were autonomously developed with high quality and in a timely fashion by a group – MPEG – that was impervious to external influences and did not practically report to anybody.

That was true for, say, the first quarter of century of MPEG life. In the last few years of MPEG life, however, some tectonic changes had seriously hampered MPEG’s ability to serve the industry with the same level of efficacy as in years before.

The disbandment of MPEG following the successful attack by obscure forces decided in June 2020 has put the final seal on a unique adventure.

2 Why there was MPEG

I always considered a slap in the face of billions of people the fact that television had been designed to be non-interoperable across most countries. I thought that if the variety of lower-level technologies had been used to create walled gardens, digital technologies could be used to define formats that were abstracted from these lower-level technologies. If those formats – compressed because of the limited bitrate offered by physical media practically available at that time – could become accepted standard, universal communication would become possible. Those formats would be welcomed by consumers, but probably even more by manufacturers, and content and service providers who could flood a global market with their products, content and services.

MPEG was established in January 1988 by the entente of two people: myself who had the vision and Hiroshi Yasuda who had the standard committee I needed – JPEG.

Over the years MPEG has developed and rationalised what can be called the “MPEG business model”, whose main elements are:

4 The success of the MPEG business model

The intentions of the MPEG business model have been well accepted by industry, but also by consumers for which MPEG is a brand name.

Here is a summary analysis of how the MPEG business model was a success:

5 The clay feet of the MPEG giant

One should never think that human endeavours will stay unchallenged, especially when we deal with long period of time and when the time is today when things happen faster and faster.

In the last decade, the environment in which MPEG operated underwent tectonic changes.

Tectonic change #1. The environment gradually transitioned from an extremely varied ecosystem of MPEG customers, to one where the number of customers was reduced because of the inability of many players to stand competition from successful players.

Tectonic change #2. Many of the companies who stopped using MPEG stan­dards for their business, opted to keep their valuable human resources to develop tech­nologies. In other words, they became Non-Practicing Entities (NPE). Their attitude changed from joining MPEG because they needed standards, to joining MPEG just to inject their IP into the standards.

Tectonic change #3. Because they were non-practicing, NPEs were not interested in patent pools delivering good licences in a timely manner. Their only interest was maximising the profit they could make from their patented technologies. Patent pools could even become an obstacle to their plans.

Tectonic change #4. The metamorphosis of one time high-flying companies to NPEs accelerated a process that was already in place: the birth of companies entirely dedicated to producing IP with little or no interest in using their IP to do business that was not monetising their IP. Tectonic changes #3 and #4 explain why HEVC has 3 patent pools, whose members sometimes belong to more than one patent pool, with different non-converging licences and some 10 companies who are assumed to be patent owners but do not belong to any patent pool and do not make their licences known.

Another reasons that can be added to explain MPEG’s clay feet is competition from other standards. Far from being a negative point, competition is an advantage for those who compete (not necessar­ily for industry and consumers), but only if competition happens on a level play field. This was not the case for MPEG who was subjected to ISO rules that were not updated probably because keeping outdated rules was convenient to some of the players who occupied vital nerve centres of ISO.

Since the beginning, my role in MPEG has always been to produce neutral standards upholding the values of MPEG. From the above, however, it is clear that the MPEG values were no longer convenient to too many players. I do not know if there was a General Antonio López de Santa Anna in command of the army besieging MPEG. For sure the prospects of the bounty kept together an army with disparate goals:

MPEG, as an organisation, is dead, but the MPEG name, which resides on the mouths of billions of people, survives. Because the MPEG name is universal, some people think that they can use it.

Do we want a Metaverse or the Metaverse?

Carlo Piana submits a proposal for an “MXM Public Licence” to the Open Source Initiative (OSI), 2009/03/26

Thirty years is many years…