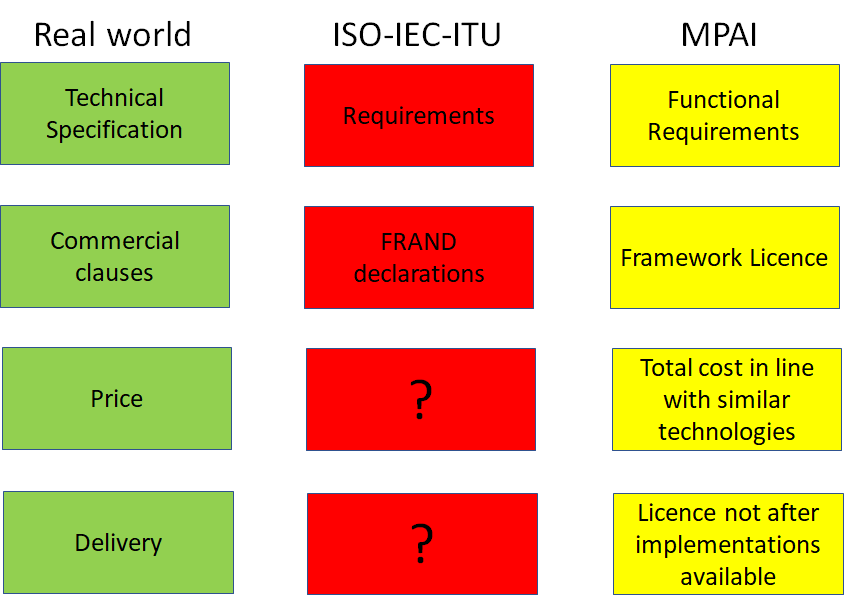 In the real world, a supply contract has at least three elements:

These are vital elements for business. Indeed, the buyer would not be happy to discover that the product ordered has twice the volume, costs twice as much or is delivered one year later than the time agreed. The buyer who had known that before would probably have placed the order to a different supplier. Not having the 3 elements clearly specified in a supply contract would be inconceivable in today’s world where product design is more than accurate, costs are cut to the bone and the supply chain operates as a Swiss watch.

Unbelievably, this is what happens in international standards.

Who defines the technical characteristics?

This means that the technical characteristics of a standard “product” are defined by a handful of people without any guarantee of representation of the needs of the global industry (forget consumers). In most cases not even the “product” requirements are made known to the public (I took pain to make them known in MPEG). In most cases the technology is developed inside the closed walls of the committee meetings. In general it is even forbidden to make the draft specification known to the public when the technical specifications of the product have reached a certain level of stability.

The Patent Holder is prepared to grant a (Free of Charge) license to an unrestricted number of applicants on a worldwide, non-discriminatory basis and under other reasonable terms and conditions to make, use, and sell implementations of the standard.

The brackets means that statement may have the Free of Charge part, without brackets, or not have it. The collection of statements can be hardly considered an answer on which to develop a business plan.

When is the “product” available?

By “available” I mean that the customer knows the business model that will be practiced and the amount it will be charged to use the standard.

The time is absolutely unpredictable and, a priori, not even guaranteed for standards in the digital media domain. Typically, standards include essential patents from many patent holders. In some cases (like in the MPEG-2 Video, MPEG-4 Visual and MPEG-4 AVC standards) a patent pool collected virtually all patent holders of a standard. It is worth noting that, a few years after the MPEG-4 Visual standard was approved, the patent pool published a licence that was unacceptable to the IT industry. With an understatement, the industry was “disappointed”.

The situation of today is vividly represented by two standards

This is what I wrote 2 days ago. Now I have discovered that there is a licence. Great, it just took a handy 6 years…

ISO is not the only supplier

This is what Amazon, Cisco, Google, Intel, Microsoft, Mozilla, Netflix thought in 2015 when they decided to establish the Alliance for Open Media. The source code of their AV1 standard was fully released in 2018 under the BSD 2-Clause License. However, a patent pool administrator claims royalties.

In this blog, have criticised the “royalty-free” approach to media coding (e.g., A crisis, the causes and a solution, Can MPEG overcome its Video “crisis”?, Business model based ISO/IEC standards, IP counting or revenue counting?) because I believe that patents in the field of digital media can be a potent instigator of innovation, while making standards “free” removes incentives to produce innovation.

This is not in contradiction with the policy I tried to implement in my last 15 years in MPEG where I advocated that MPEG should have two business models:

There is a better supplier

A new arrangement more supportive of a business-oriented approach to standardisation while respectful of the general principles of antitrust law was devised for the new organisation – Moving Picture, Audio and Data Coding by Artificial Intelligence (MPAI) – created 90 days after the capital punishment was inflicted on MPEG.

Active Members are MPAI Principal Members who intend to contribute to the technical development of a Standard.

It is clear that standards are special “products”. However, MPAI shows that it is feasible to bring standards products closer to real world products.