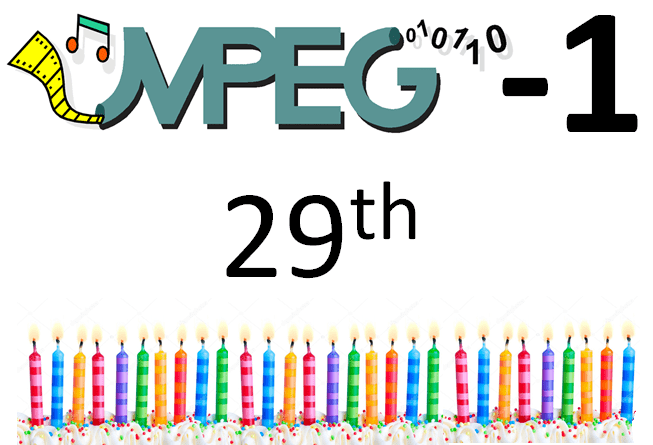 For the first 10 years, the cadence of MPEG meeting was March-July November. In addition to these 3 meetings per year, a number of other meetings were added to cope with the hectic rhythms of development of the first standards. The total number of meetings was 43, which makes about 4 meetings a year. If we consider that MPEG had 130 meetings, i.e., 32 years, until its end in 2020, the average meeting frequency remained constant at 4 per year. So the pace of development of MPEG standards kept on being hectic :-). This does not include the ad hoc group meetings. In the early days of MPEG I kept track of them, but eventually gave up. My estimate is that there were about 200-300 ad hoc group meetings in total.

It so happened that the first two MPEG standards – MPEG-1 and MPEG-2 – were approved in November. This November I want to celebrate the 29th anniversary of MPEG-1.

In the collective imagination, MPEG-1 is the younger and less famous brother compared to MPEG-2 with its towering importance. I am not going to make a competition between the two because all MPEG standards are my kids, but I should like to emphasise that MPEG-1 has several merits of its own.

Digging deeper in the MPEG work