For three decades MPEG has designed multi-threaded work programs, cooperated with tens of organisations and developed close to 200 specifications and hundreds of amendments. MPEG standards have transformed the global media industry from analogue to digital, enabled participation of new industries in the media business, provided standards serving all industries without favours and ensured unrelenting expansion of the entire media business.

Should MPEG rest and look forward to a bright future built on the successes achieved? It would be so easy to answer “tout va très bien madame la marquise” but my answer is no.

The MPEG landscape has changed

In the first 10 years of its existence MPEG ruled the field of audio and video coding. In the following 10 years some proprietary solutions popped up, but the field was still largely dominated by MPEG standards. In the last 10 years MPEG has seen proprietary solutions getting significant strength. Today large areas that used to be exclusively covered by MPEG standards are satisfied by other solutions and the path to satisfy the next needs is not at all clear.

We do not have the complete picture yet of the extent the market will turn its back to MPEG standards. Market will speak and market is right by definition. If we do not like it, it is just because we did not try hard enough.

The next few years will be very challenging. It will not be a time of “business as usual”. MPEG needs to rethink itself and take appropriate measures. This article lays down some ideas and presents a proposal.

MPEG is about compression

So far MPEG has produced 5 generations of video compression standards, each generation offering more compression and more features. More of the same is expected from the 6th generation (VVC). MPEG has produced an equivalent number of audio coding standards. Will industry keep on asking for more video compression? I would like to answer with a resolute yes as I believe that there will always be need for more compression of visual information, but not always and not necessarily of the “old way”. More importantly, the need will not always be satisfied by MPEG standards because “The Price Is Right” applies to compression standards, too.
The answer to the question “Do we need more audio compression?” is, at least in the current time frame, that the currently available compression engine (MPEG-H 3D Audio) is good enough but we need new standards for other non-compression features, e.g. 6 Degrees of Freedom (6DoF). In the future this trend will also apply to video, as 3DoF+ video moves in the same direction as 6DoF audio (see The MPEG drive to immersive visual experiences).
Point cloud compression definitely needs compression but the convergence between 3D visual information captured by means of traditional video capturing devices and Point Cloud is still a matter for investigation.

MPEG is also about systems aspects

Systems aspects have been the enabling factor of the success of many MPEG standards and the future will not make those aspect less, but more important. The trend toward immersive media will require an even deeper integration between compressed media and the systems aspects that permeate them.
This can be seen from the requirements that are being identified in an activity called “Immersive Media Access and Delivery” where four dimensions are identified:

MPEG in not just about media

In the past 30 years MPEG has shown that it could address new domains of expertise and learn their language. The fact that today all digital media speak the same (technical) language, is also due to the efforts made by MPEG to understand the needs of different industries, convert them to requirements, develop the technologies and quantise the standards into profiles and levels. This workflow has been in operation for 27 years, starting from the moment MPEG invented profiles and levels, and consistently applied them to talk to different communities using the same language.
This does not mean that there are no challenges when we talk to a new industry. MPEG has spent more than 3 years talking to, and identifying and validating requirements with the genomic community before starting the development of the MPEG-G standard. This significant effort has paid off: three International Standards on Genomic Data Compression have been developed jointly with TC 276 and 3 more are in the pipeline.

MPEG achieved its results as a working group, i.e. as the lowest organisational unit in ISO/IEC that the ISO/IEC directives recommend to be “reasonably limited in size”. Rightly, the ISO/IEC Directives do not define the term “reasonable”, but in 1989 MPEG had already 100 members, in 1999 it had 300 members and in 2019 it has 1500 members 500 of which attend its quarterly meetings. For the work it has done, MPEG has been reasonably limited in size.

For 30 years MPEG has played a role much above its status and I do not think there should be complaints about the results. In normal conditions MPEG could continue to operate as a working group for another 30 years but, as I said above, these are not normal conditions.

MPEG should become a Subcommittee (SC). Why? Because an SC has a solid governance administered by delegates appointed by National Bodies under the leadership of a chair. On the other hand, the design of the organisation must be properly done, if we do not want to do more harm than good.

Design of the SC is important 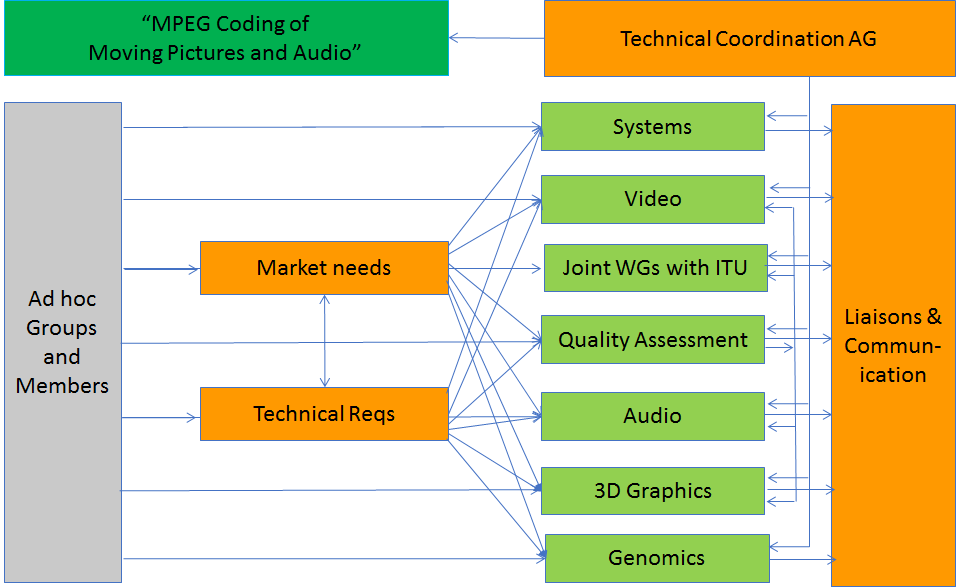 Criterion #1: the organisational chart of Figure 1 retains the current MPEG organisational structure where existing informal subgroups become (in italic the names of the existing MPEG entities):

Advisory Groups (AG) if they do not develop standards (orange blocks):

Criterion #3: The SC will now be able to carry out activities with high strategic value by assigning to the Market Needs AG Technical Requirements AG the task to investigate 1) existing or new areas of work and 2) proposals for new areas of work. Both AGs will produce coordinated reports that will be used by the MPEG SC to make an informed decision on new work.

Criterion #4: The SC should be called “MPEG Coding of Moving Pictures and Audio” prefixing the word MPEG to the current title of ISO/IEC JTC 1/SC 29/WG 11 (MPEG).

In a few weeks industry will decide the future of MPEG.

Will industry decide to give itself a safe and prosperous path by adopting the organisation proposed in this article or will it opt for the Japanese saying “出る釘は打たれる” (The nail that sticks out gets hammered down)? Will industry allow the MPEG nail to keep on sticking out or will it hammer it down?

Stay tuned to this block for further news.