In How does MPEG actually work? I described the way MPEG develops its standards, an implementation of the ISO/IEC Directives for technical work. This article describes the life of one of MPEG most prestigious standards: MPEG-2 Systems, which has turned 26 in November 2018 and has played a major role in creating the digital world that we know.

What is MPEG-2 Systems?

When MPEG started, standards for compressed video and later audio was the immediate goal. But it was clear that the industry needed more than that. So, after starting MPEG-1 video compression and audio compression, MPEG soon started to investigate “systems” aspects. Seen with today’s eyes, the interactive CD-ROM target of MPEG-1 was an easy problem because all videos on a a CD-ROM are assumed to have the same time base, and bit delivery is error free and on-time because the time interval between a byte leaving the transmitter is the same as the time interval at its arrival at the receiver.

In July 1990, even before delivering the MPEG-1 standard (November 1992), MPEG started working on the much more challenging “digital television” problem. This can be described as: the deliver of a package of digital TV programs with different time bases and associated metadata over a variety of analogue channels – terrestrial, satellite and cable. Of course operators expected to be able to do the same operations in the network that the television industry had been accustomed to do in the several decades since TV distribution had become common place.

A unique group of experts from different – and competing – industries with their different cultural backgrounds and many countries, and the common experience of designing from scratch the MPEG-1 Systems standard, designed the MPEG-2 Systems standards, again from a blank sheet of paper.

The figure illustrates the high-level structure of an MPEG-2 decoder: waveforms are received from a physical channel (e.g. a Hertzian channel) and decoded to provide a bistream containing multiplexed TV programs. A transport stream demultipler and decoder extracts audio and video streams (and typically other streams not shown in the figure) and a clock that is used to drive the video and audio decoders.

The structure of the transport bitstream is depicted in the figure. The stream is organised in fixed-length packets of 188 bytes of which 184 bytes are used for the payload. 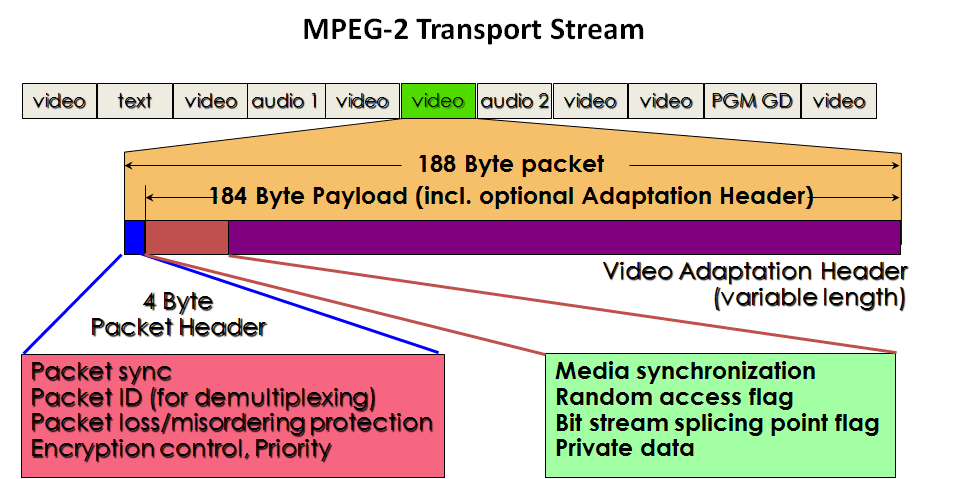 The impact of MPEG-2 Systems

MPEG-2 Systems is the container and adapter of the digital audio and video information to the physical world. It is used every day by billions of people who receive TV programs from a variety of sources, analogue and, often, digital as well (e.g. IPTV).

MPEG-2 Systems was approved in November 1994 while some companies who could not wait had already made implementations before the formal release of the standard. That date, however, far from marking the “end” of the standard, as it often happens, it signaled the beginning of a story that continues unabated today. Indeed, in the 26 years after its release, MPEG-2 Systems has been constantly evolving, while keeping complete backward compatibility with the original 1994 specification.

So far MPEG has developed 34 amendments (ISO language to indicate the addition of functionality to a standard), 3 additional amendments are close to completion and one is planned. After a few amendments are developed, ISO requests that they be integrated in a new edition of the standard. So far 7 MPEG-2 Systems editions have been produced covering the transport of non-MPEG-2 native media and non-media data. This is an incomplete lists of the trasnport functionality added:

Producing an MPEG-2 Systems amendment is a serious job. You need experts with the full visibility of a 26 years old standard (i.e. don’t break what works) and the collaboration of experts of the carrier (MPEG-2 Systems) and of the data carried (audio, video etc.). MPEG can respond to the needs of the industry because it has available all component expertise.

MPEG-2 Systems is probably one of MPEG standards that is less “visible” to its users. Still it is one of the most important enablers of television distribution applications impacting the life of billions of people and tens of thousands of professionals. Its continuous support is vital for the well-being of the industry.

The importance of MPEG-2 Systems has been recognised by the Academy of Television Arts and Sciences who has awarded MPEG an Emmy for it.

Looking inside an MPEG meeting