In How does MPEG actually work? I described the “MPEG standards work flow” from a proposed an idea to the release of the corresponding standard and its verification. I also highlighted the key roleplayed by MPEG experts as the real makers of MPEG standards.

In this article I would like to introduce the role played by the peculiar MPEG organisation and some of its members in facilitating the work of MPEG experts.

MPEG operates in the framework of the International Organization for Standardization (ISO). To be entitled to attend and actively participate in the MPEG work, experts or their companies must be members of one of the 162 national standards organisations who are members of ISO. Respondents to an MPEG Call for Evidence (CfE) or Call for proposals (CfP) are allowed to attend a meeting where their proposal is presented for the first time. To continue attending, however, proponents are required to become formal members (and they have better to do so if they want to defend their proposals).

The figure below depicts the conceptual MPEG organisation as of today. In its 30 years MPEG has created and disbanded several groups created for specific needs. More about the history of the MPEG groups and their chairs can be found here. 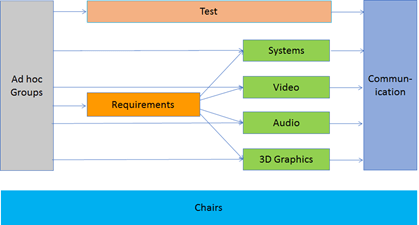 New ideas are typically submitted to the Requirements group. If they are considered worth of further explorations they are typically discussed in ad hoc groups (AHG) after the meeting. As explained in How does MPEG actually work? the AHG will report its findings at the following MPEG meeting. After a few iterations, MPEG will produce a Call for Evidence (CfE) or Call for Proposals (CfP) with due publicity in the Press Release. At that time. the AHG is charged with the task to disseminate the CfE or CfP, prepare for the logistics of the tests and perform a first assessment of the responses.

This does not mean that the Requirements group is no longer involved in this standard because the group typically continues the development of Use Cases and Requirements while the technical work progresses. When necessary, requirements are reviewed with the appropriate technology groups and may give rise to new CfPs whose outcome is fed into the work of the relevant technology groups after an assessment.

Today the task of the Test group is no longer confined to the assessment of the quality of proposals at CfE and CfP time. Designing and executing appropriate quality tests in support to Core Experiments has become the norm especially in the Video group.

If a Call requests Proposals, the Requirements group, in conjunction with the Test group and possibly one or more technology group, reviews the result of the AHG and makes a final assessment. If the technologies submitted are judged to be sufficient to initiate the development of a standard, the activity is tranferred to that/those group(s) for standard development.

The chairs come from a variety of countries (CN, DE. FR, IT, KR, US) and organisations (small/medium size and large companies, and Universities).

A key MPEG feature is the immediate availability of the necessary technical expertise to discuss matters that cross organisational boundaries. The speed of development and quality of MPEG standards would hardly be possible if MPEG did not have the ability to timely deploy the necessary expertise to address multi-faceted issues.

Let’s take as an example this video where the basketball player is represented as a compressed dynamic point cloud in a 360ᵒ video. The matter is raised at a meeting, discussed at a Chairs meeting where the need for a joint meeting is identified. This is proposed to the MPEG plenary and held with the participation of Requirements, Systems and 3D Graphics Coding experts. The outcome of such a meeting may be anything from the acknowledgement that “we don’t know well enough yet”, to the identification of technologies that can simply be developed as a collaborative effort of MPEG experts or require a CfP.

As a typical example let’s consider some of the joint meetings held at MPEG 124 (20 in total):

How are documents fed into the MPEG process? This is not a marginal aspect if we consider that the number of submissions uploaded can easily cross 1000 documents. In an age of (almost) pervasive broadband internet, it is hard to imagine how MPEG could operate in a totally “paper-based” fashion when its membership was already around 300. In October 1995 Pete Schirling (then with IBM) made available to MPEG a document management system that allowed MPEG members to upload their documents and download those uploaded by the other members. Wo Chang (NIST) in 2000 and Christian Tulvan (Institut Mines Télécom) in 2005 have taken over the system that ensures the high efficiency of MPEG operation.

Recently ISO has developed its own document management system for use by all entities in ISO. However, MPEG has been exempted from using it because the traffic generated by uploading and downloading MPEG document in the weeks around an MPEG meeting would bring the system down. Incidentally, a requirement for hosting an MPEG meeting is the availability of internet access at 1 Gbit/s.

For MPEG experts (and those who do not attend yet) a place with so many “hotbeds” discussing requirements, and assessing, integrating and testing media technologies is exciting, but how can MPEG experts know what happens where and when at a meeting? Christian, the designer and maintainer of the MPEG document management system, has come to help again and designed a system that answers those questions. MPEG members can have a full view of which meetings are held where and when to discuss which topics or documents. The design is responsive so MPEG experts can get the information from their smartphones.

The figure shows a how the service looked like at MPEG 124 (October 2018). The page all meetings of all groups, but filtered views are possible. By clicking on each meeting details (room, documents etc.) can be obtained. 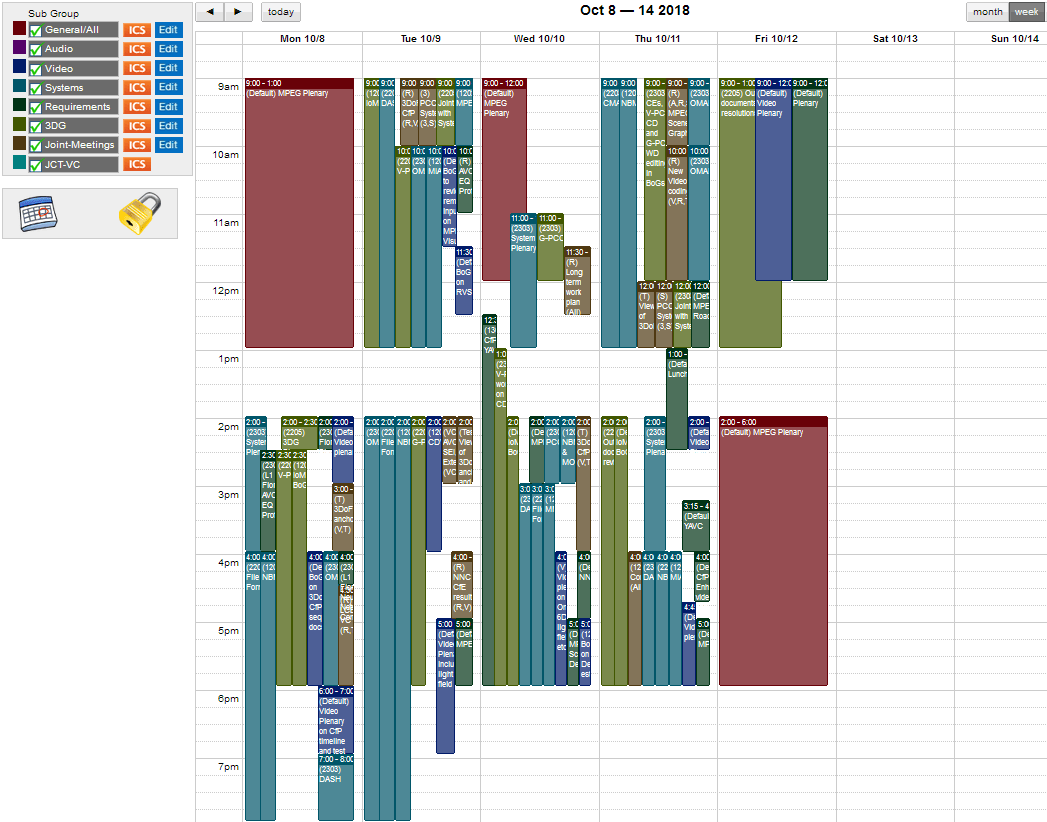 Another major development made by Christian provides the chairs with a series of functionalities to manage the MPEG workplan and timeline. Some of these, like the one below, are open to MPEG members.

The figure shows the MPEG timeline for the portion related to the MPEG-I, MPEG-CICP and MPEG-G standards. On the top there are icons to create new activities, show different table previews, provide project-wise views and more. 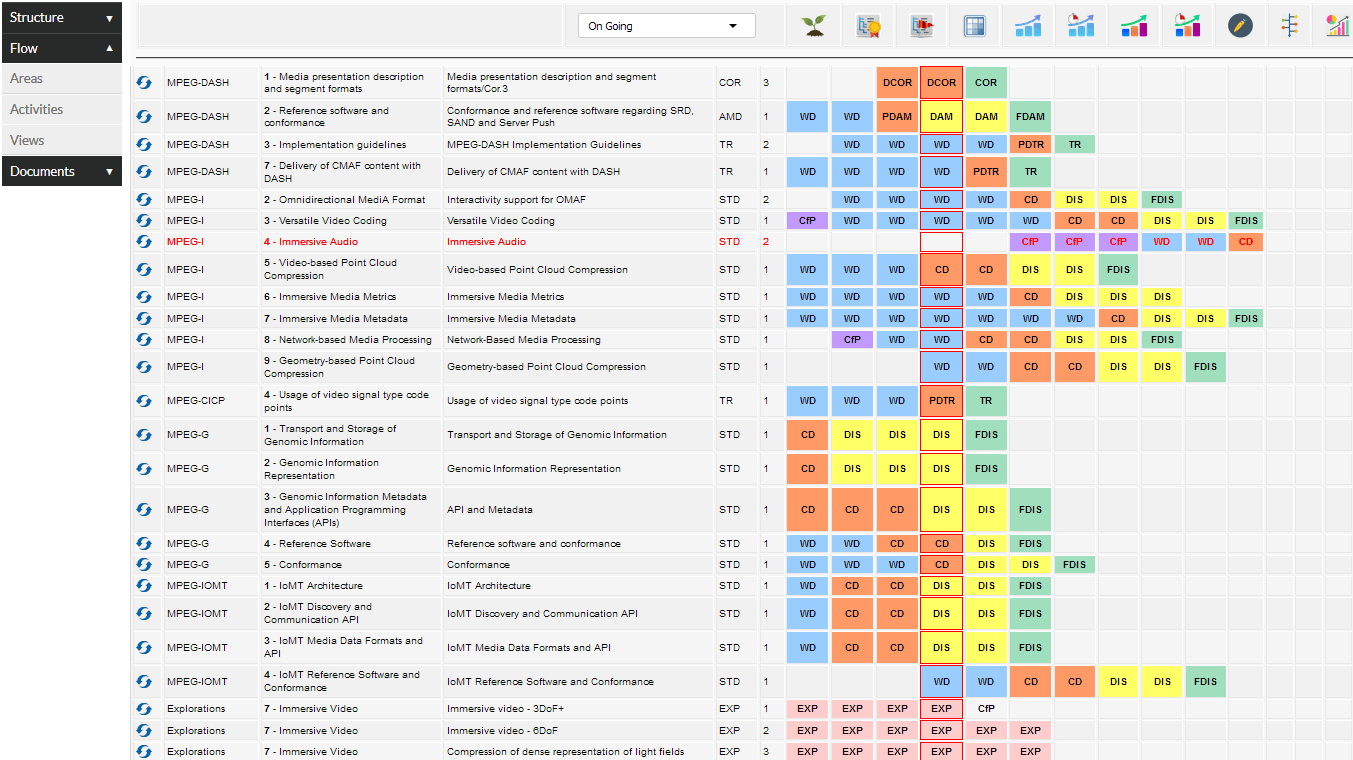 Another remarkable functionality is the creation of the document that collects all the results from a meeting. Group chairs enter their own results independently and the system organises them by standards for approval at the Friday plenary. This has made the review of decisions shorter and allowed MPEG to slash the time taken by plenaries.

MPEG defines as assets the data associated with the development of standards: URIs, Schemas, Content, Software and Conformance testing data.

The first two are publicly available here and here.

By Content assets we mean the collection of all test data (content) used for CfEs and CfPs, and in subsequent Core Experiments. MPEG relies on the good will of companies interested in a standard to provide relevant test data. These are typically licensed for exclusive use in MPEG standardisation because they typically have high value, e.g. from the content and technology viewpoints. Content owners license their content directly to individual MPEG experts.

Software assets is the collection of all software developed or under development as reference software of MPEG standards. With the approach taken by MPEG to develop most of its standards from reference software and give it a normative status, its importance can hardly be overstated.

This article can only give hints at the level of commitment and dedication of so many MPEG members – with the support of their companies. Of course, MPEG standards are produced by MPEG experts, but the MPEG process works because so many other people and organisations contribute, some in a visible and some others in a less visible form to make MPEG what it is.