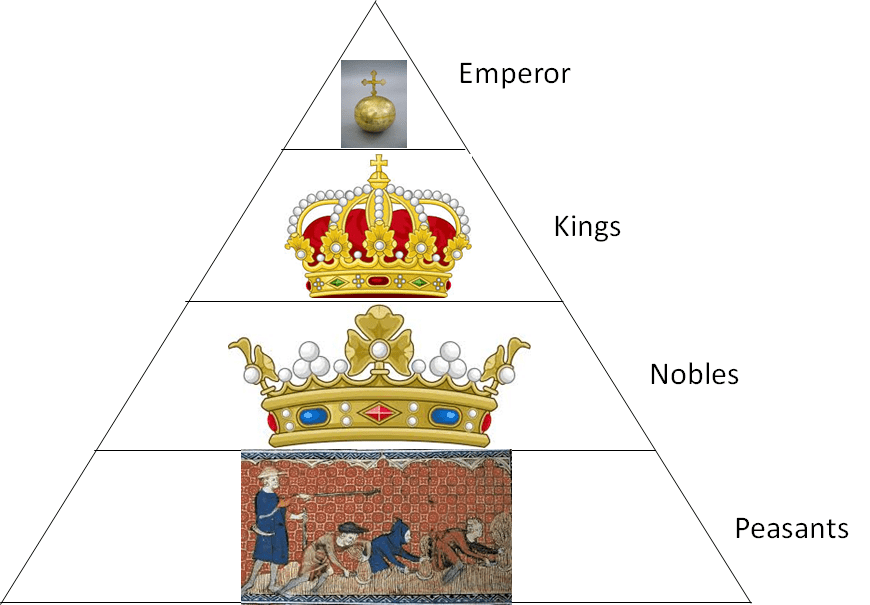 The “International Organisation for Standardisation” – ISO – was established in 1947 on the ruins of World War II to accomplish one of the noblest activities that can be performed for humankind: making standards. I call this a noble activity because standards make the society of humans possible and better.

When I first encountered ISO in 1987, I found it unique because the national ISO counterparts, so-called National Standards Bodies, even in countries not particularly bent on it, gave senior positions to women. That characteristic, not so common in business at that time, largely continues today.

However, having operated in ISO for some 33 years, with many opportunities to see it at work, I have found positive characteristics along with aspects that are odd survivors of an age that most people I know would think is gone for good. Those surviving aspects, that in this paper I describe with the word feudal, still impregnate the organisation. It is a pity, and an inexcusable one, because the role of standards in a society that gets more numerous and integrated every day, is bound to increase.

Countries reject products that have been produced by, say, workers in unhealthy conditions, not because they are not good, but because they object to the way the products have been made. Many users are unaware of the way ISO standards are made. If they knew, they would probably question rules and customs that are a relic of the past today. I intend to provide elements of knowledge in the hope that things will change for the better.

I have two disclaimers. The first is that nothing of what I say in these articles is intended to apply to other standards developing organisations (SDO). While my experience in ISO is quite deep and pervasive, my experience of other SDOs is too shallow to attempt to characterise them in any way. What I know of some of them tells me they do not have the attributes that make, in my opinion, ISO unfit to the name it bears. The second is that what I say is intended to apply to ISO as the organisation registered in Geneva. They are not meant to apply, unless I will say explicitly so, to specific people working in the organisation or in its national counterparts.

ISO is Non-Governmental Organisation (NGO). However, it is international in nature. It is hierarchical as depicted in the figure below. 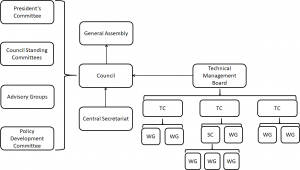 It should not be a surprise that ISO is also bureaucratic. Many governmental organisations and private corporations are hierarchical and bureaucratic. The main difference here is in the way authority is exercised at each layer. This is what makes the functioning of the ISO structure look more like that of the Holy Roman Empire than of a company.

The ISO structure at work

A standardisation area is assigned to a Technical Committee (TC) managed by a secretariat. The secretariat is run by one or more employees from an ISO member body headed by a Committee Manager (used to be called Secretary) from the same member body. Secretariat is typically selected from a country playing an important role in the particular industry served by the TC.

This is the first feudal characteristic of an organisation that is supposed to produce standards that boast the “international” adjective. The fact that a country with a prominent role in an industry is also in charge of making standards for that industry does not just sound right. Not only the country has a dominant role, hence market power, in an industry, but the country, by exercising the extensive powers that the directives assign to the secretariat, can ultimately control the standards of the domain as well.

Of course it is my duty to say that the ISO/IEC directives, which all elements of the ISO structure must follow, mandates “A secretariat shall act in a purely international capacity, divesting itself of a national point of view”. This is laudable, but it is an intention. Why put intentions to the test of reality and why not have someone less engaged in that particular field to act as secretariat? I am saying this because, typically, the cost of the secretariat is borne by the domain industry of that country. More intentions at work, more intentions to test.

One example of the “extensive powers” of the secretariat is provided by the ISO/IEC directives. The secretariats of TCs and their SCs have the power to nominate the chair of the TC or of the SC, to be formally approved by the layer above. This chair-secretariat dualism is made more questionable by the rules of some TCs that make it a custom, if not the rule, that the chair be from the same country as the secretariat. More intentions at work, more intentions to test.

Here are some examples of personal experiences about feudalism in ISO.

At one JTC 1 meeting where I represented Italy, I introduced myself to a Subcommittee chair as MPEG Convenor because I thought MPEG should cooperate with that SC in matters of common interest. The chair looked down on me with the attitude of “how do you dare, you lowly Working Group convenor, talk to me, Subcommittee chair?”. Then, he condescendingly talked to me for a half a minute.

The second case is the assignment of a prize to the chair of an SC whose most notable achievement was to chair the shortest yearly meetings of the SC plenary. This is again feudalism at work: the foot soldiers bear the brunt, the officers get the medals.

Let me now briefly explain how the rules governing the organisation (the directives) are managed. The principal difference of a feudal regime versus a modern regime is the separation of powers. The legislative, executive and judiciary powers are what makes us proud of our statehoods.

One fresh example. Imagine you have a divisive issue at a meeting that must be sorted out. Even those with limited experience know that you can get different results depending on how you ask a question. Well, you can well not believe me, but the secretariat has the power to decide which type of question the committee will vote. If you ask to record a statement in the minutes, they tell you that only the Committee Manager can write the report. So your statement gets unrecorded.

How can this organisation do the work it expected to do, then? Simple. ISO is populated by excellent people operating in Working Groups while the rest plays the power game in the higher layer, possibly getting medals. For the people in the Working Group the Japanese maxim applies: 出る釘は打たれる (The nail that sticks out gets hammered down).

Not everything is feudal

It is important to remark that important aspects of the ISO society are not feudal.

For instance, in the Holy Roman Empire there were kingdoms, duchies, margraviates, counties and the like. It could happen that a king wanted to take direct control of a margraviate and get rid of a margrave, say, because he was too successful in his drive to conquer the eastern territories or because he wanted to give a fiefdom to one of his vassals. Most likely the margrave would not agree to be taken over, claiming his achievements and the fact that he had complied with his feudal duties of allegiance. Undeterred, the king would send emissaries in hiding (called “missi dominici”) to bribe some ambitious vassals of the duke and get them to support the king. Then the emissaries would also sweet talk other vassals of the duke and would threaten retaliations on the vassals who were still not bending. Finally, the king could easily take over the remaining supporters by sheer military force.

Feudal is an attribute that befits ISO in a number of cases (and I will report more in the future), but not in this one. An ISO TC would never try to get control of a duchy or of a margraviate, sorry, I meant a SC or WG. That is because, more than 1,000 years after the Early Middle Ages and the abolition of serfdom, one can rightly expect to see ISO populated by people with a straight back who would never be convinced to switch allegiance by promises, bribes, sweet talks, or threats of retaliation.

A case like the one described above for the Holy Roman Empire is simply inconceivable in ISO.

Developing standards while preparing for the future

MPEG: what it did, is doing, will do

The impact of MPEG on the media industry