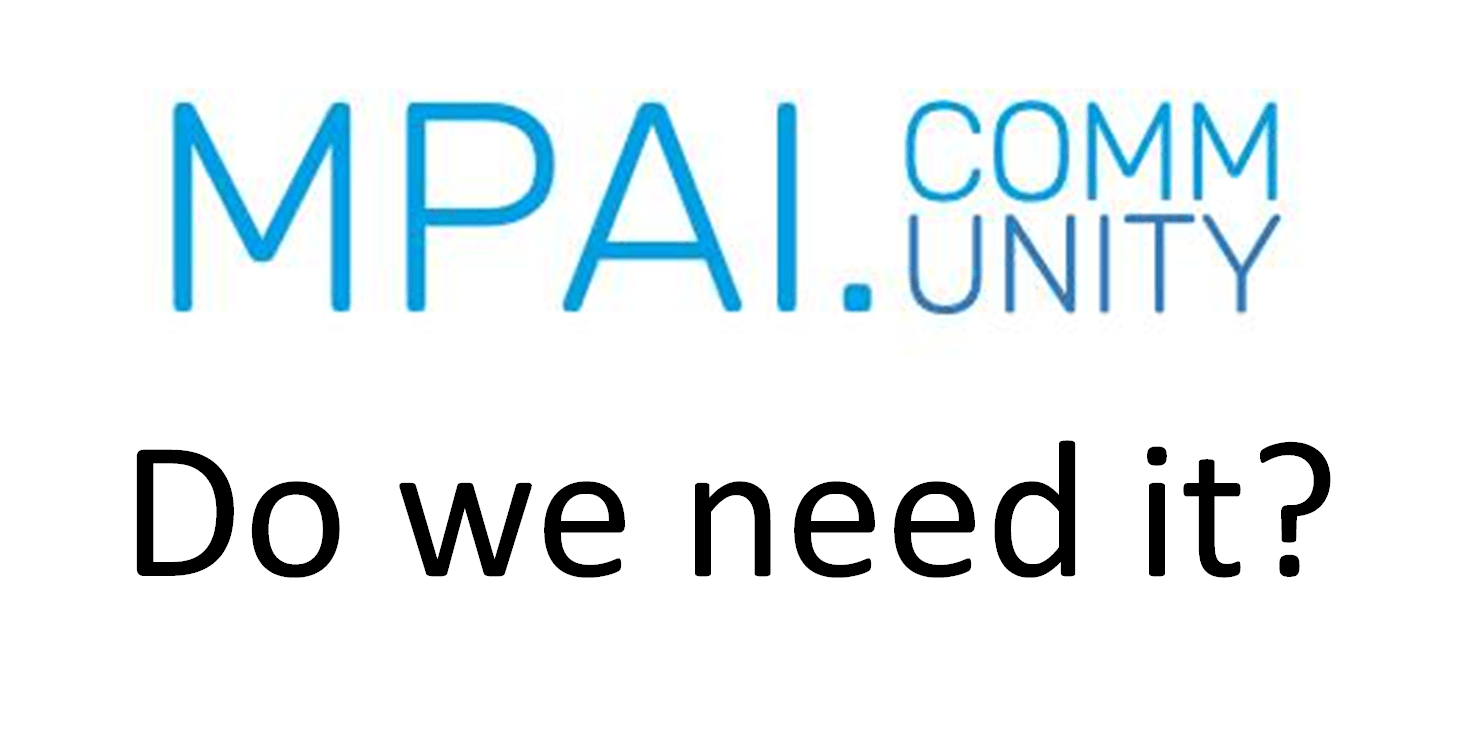 Sunday last week I launched the idea of MPAI – Moving Picture, Audio and Data Coding by Artificial Intelligence – an organisation with the twofold goal of 1) developing Technical Specifications of coded representation of moving pictures, audio and data, especially using artificial intelligence and 2) bridging the gap between technical specifications and their practical use, especially using “framework licences”.

The response has been overwhelming, but some have asked me: “Why do we need MPAI?”. This is indeed a basic question and, in this article, I intend to provide my answer.

As much as VC1, VP8/VP9 and AV1 were developed because MPEG and/or its ecosystem were not providing the solutions that the market demanded, MPAI responds to the need of industry to have usable standards that allow industry and consumers to benefit from technological progress.

The body producing standards of such an industrial and social importance should be credible. MPEG is no more, and its unknown SC 29 replacement operates in ISO, a discredited environment because of its lack of governance. The very fact that a determined and connected group of ISO entities could hijack a successful group as MPEG, with its track record serving the industry, is a proof that, at the macro level, major decisions in ISO are made because some powers that be decide that certain things should go in a direction convenient to them. Then, at the micro level, common-sense decisions like preserving MPEG plenaries where the conclusions of different groups are integrated in a single whole are blocked because “they are not in the directives” (as if hijacking MPEG was in the directives).

The standards produced by the body should be usable. I have already written that, about 15 years ago, at what was probably the pinnacle of MPEG success, I was already anticipating the evolution of the industry that we are witnessing today. However, my efforts to innovate the way MPEG developed standards were thwarted. I tried to bring the situation to the public attention (see for instance …). All in vain. The result has been that the two main components of MPEG-H, the latest integrated MPEG project – part 2 video (HEVC) and part 3 audio (3D Audio) – have miserably failed. The hope to see a decent licence for Part 3 video (VVC) of the next integrated MPEG project – MPEG-I – is in the mists of an unknown future and may well tread the same path.

It could well happen that, in a burst of pride, VVC patent holders will want to show that they can get their acts together and deliver a VVC licence, but who guarantees that, at the next standard, the same HEVC/3D Audio pantomime will not be on stage? Can the industry – and billions of consumers – continue to be the hostage of a handful of string pullers acting in the dark?

We need a North Star guiding the industry in the years to come. Thirty-two years ago, the start of MPEG was a watershed. Digital technologies promised to provide more attractive moving pictures and audio, more conveniently and with more features to the many different and independent industries who were used to handle a host of incompatible audio-visual services. Having been present then and being present now, I can testify that MPEG has delivered much more than promised. By following the MPEG North Star, industry has got a unified technology platform on which different industries can build and extend their business.

MPAI is the new watershed. I don’t know if bigger or smaller than 32 years ago, probably bigger. Artificial Intelligence technologies demonstrate that it is possible to do better and more than traditional digital technologies. But there is a difference. In the last 32 years digital audio and video have offered wonders, still they kept the two information streams isolated from the rest of the information reaching the user. With artificial intelligence, audio and video have the potential to seamlessly integrate with the many other information types handled by a device on a unified technology platform. How? Leave it to digital media and artificial intelligence experts, which have started to become an integrated community, to open their respective domains to other technologies.

It would be nice – and many, I for one, would thank for it – if someone undertook to solve the open problems in the use of digital media standards past. I am afraid this is an intricate problem without a unified point from which one can attempt to find a solution.

But is that a worthwhile effort? One way or another, industry has interoperable audio-visual technologies for its current needs, some even say more than it needs.

What remains of the group that did the miracle in the past 32 years is paralysed and the organisation in which it used to operate is problem-ridden and discredited. I pity the hundreds of valuable experts who are forced to face unneeded troubles.

Look to the future

Let’s look to the future, because we can still give it the shape we want. This is what the MPAI statutes suggest when they define the MPAI purpose as developing technical specifications of coded representation of moving pictures, audio and data, especially using artificial intelligence.

The task for MPAI is to call the large community of researchers from industry and academia to reach the goal to develop standards that provide a quantum leap in user experience by doing better and offering more than done so far, and by achieving a deeper integration of information sources reaching the user.

I know that the technologies in our hands have the potential to reach the goal, but only a new organisation that has the spirit, the enthusiasm and the effectiveness of the old one to deliver on the new promises can actually reach the goal.

That is the ideal reason to create MPAI. A more prosaic but vital reason to do it is that standards should also be usable.

Developing standards while preparing for the future