In Is there a logic in MPEG standards? I described the first steps in MPEG life that look so “easy” now: MPEG-1 (1988) for interactive video and digital audio broadcasting; MPEG-2 (1991) for digital television; MPEG-4 (1993) for digital audio and video on fixed and mobile internet; MPEG-7 (1997) for audio-video-multimedia metadata; MPEG-21 (2000) for trading of digital content. Just these 5 standards, whose starting dates cover 12 years i.e. 40% of MPEG’s life time, include 86 specifications, i.e. 43% of the entire production of MPEG standards. 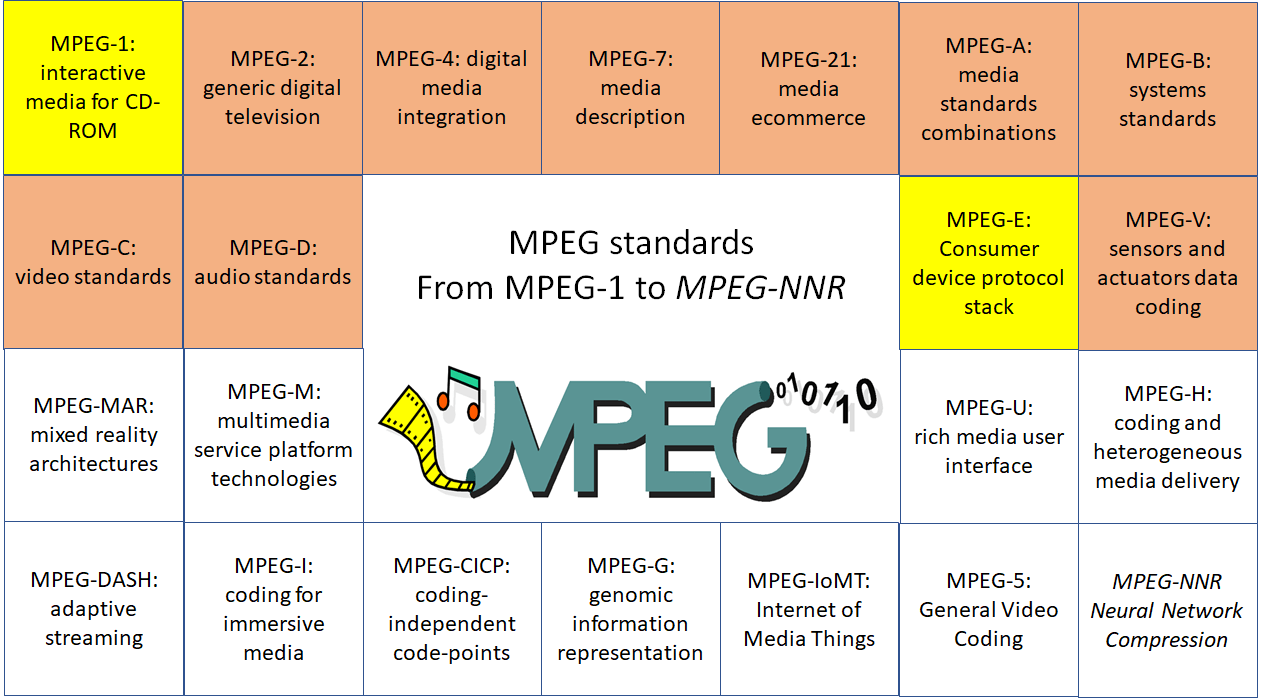 The official title of MPEG-A is Multimedia Application Formats. The idea behind MPEG-A is kind of obvious: we have standards for media elements (audio, video 3D graphics, metadata etc.), but what should one do to be interoperable when combining different media elements? Therefore MPEG-A is a suite of specifications that define application formats integrating existing MPEG technologies to provide interoperability for specific applications. Unlike the preceding standards that provided generic technologies for specific contexts, the link that unites MPEG-A specifications is the task of combing MPEG and, when necessary, other technologies for specific needs.

An overview of the MPEG-A standard is available here. Some of the 20 MPEG-A specifications are briefly described below:

The official title of MPEG-B is MPEG systems technologies. After developing MPEG-1, -2, -4 and -7, MPEG realised that there were specific systems technologies that did not fit naturally into any part 1 of those standards. Thus, after using the letter A in MPEG-A, MPEG decided to use the letter B for this new family of specifications.

MPEG-B is composed of 13 parts, some of which are

The official title of MPEG-C is MPEG video technologies. As for systems, MPEG realised that there were specific video technologies supplemental to video compression that did not fit naturally into any part 2 of the MPEG-1, -2, -4 and -7 standards.

MPEG-B is composed of 6 parts, two of which are

The official title of MPEG-C is MPEG audio technologies. Unlike MPEG-C, MPEG-D parts 1, 2 and 3 actually specify audio codecs that are not generic, as MPEG-1, MPEG-2 and MPEG-4 but intended to address specific application targets.

MPEG-D is composed of 5 parts, the first 4 of which are

This standard is the result of an entirely new direction of MPEG standardisation. Starting from the need to define API that applications can call to access key MPEG technologies MPEG developed a Call for Proposal to which several responses were received  MPEG reviewed the responses and developed the ISO/IEC standard called Multimedia Middleware.

MPEG-E is composed of 8 parts

The development of the MPEG-V standard Media context and control started in 2006 from the consideration that MPEG media – audio, video, 3D graphics etc. – offer virtual experiences that may be a digital replica of a real world, a digital instance of a virtual world or a combination of natural and virtual worlds. At that time, however, MPEG could not offer users any means to interact with those worlds.

This is depicted in the figure 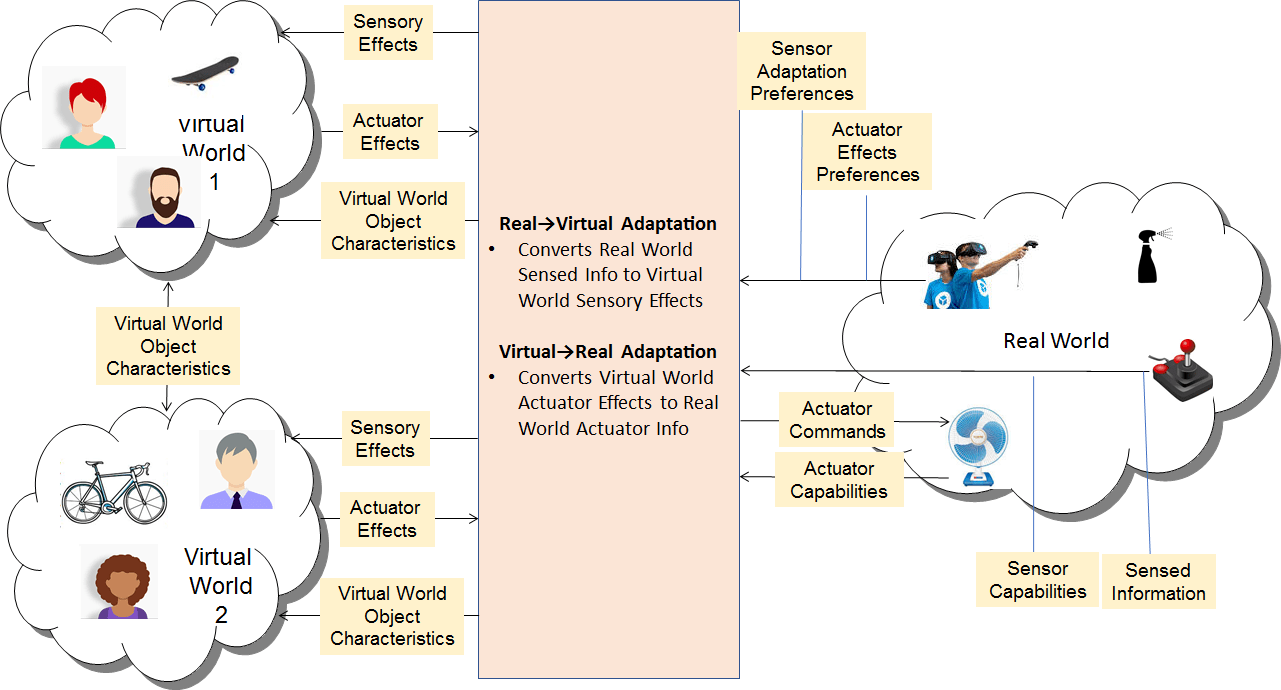 The standards from MPEG-A to MPEG-V include 59 specifications that extend over the entire 30 years of MPEG activity. These standards account for 29% of the entire production of MPEG standards.

In this period of time MPEG standards have addessed more of the same technologies – systems (MPEG-B), video (MPEG-C) and audio (MPEG-D) – and have covered other features beyond those initially addressed: application formats (MPEG-A), media application life cycle (MPEG-E), and interaction of the real world with virtual worlds, and between virtual world (MPEG-V).

Media technologies evolve and so do their applications. Sometimes applications succeed and sometimes fail. So do MPEG standards.

The driver of future MPEG standards