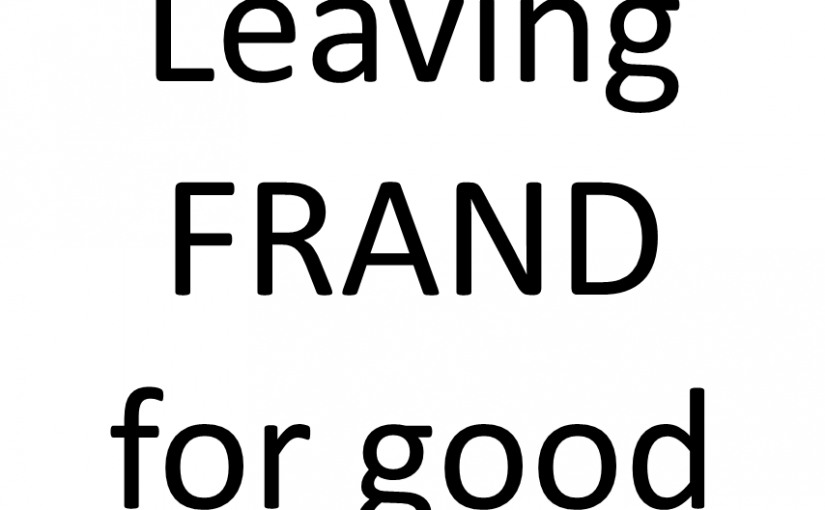 Fair, reasonable and non-discriminatory (FRAND) is the combination of adjectives that have been commonly used to indicate the way patent holders intended to licence their technologies in standards produced by many standardisation bodies and industry fora.

Decades ago, these adjectives were easily applicable to a standard. When JVC submitted their VHS cassette recording system to IEC for standardisation and IEC produced IEC 60774 – Helical-scan video tape cassette system using 12,65 mm (0,5 in) magnetic tape on type VHS, JVC submitted an FRAND declaration. The companies manufacturing VHS recorders knew exactly whom to call to get a licence. It was a small world with a limited number of players who knew each other since decades.

The same FRAND declaration was used in the MPEG-2 case. But the world at that time (1995) had already changed. As MPEG adopted the policy “any technology that it proves its worth and is accompanied by an FRAND declaration”, not only the number of licensors skyrocketed to about 30, but licensors included Consumer Electronic companies, telcos, telco manufacturers, IT companies and a couple of Non-Performing Entities (NPE) and a university.

MPEGLA created an MPEG-2 patent pool that gathered most patent holders and contributed to make MPEG-2 the first big success in a converged world.

Today the situation is again different than 25 years ago. As I have already said a few times the HEVC standard has almost two times as many the number of patent holders of MPEG-2, three patent pools and several patent holders who did not join any patent pool.

Moving Picture, Audio and Data Coding by Artificial Intelligence (MPAI), is a non-profit organisation to be established soon in Geneva. MPAI has identified the standardisation process based on accepting FRAND declarations as unable to cope with the tectonic changes that have affected the industry during the 30 years since work on the successful MPEG-2 standard started.

MPAI acknowledges the value of unconstrained collaboration adopted by MPEG. This should be retained, however, leaving to the market the task of sorting out all commercial aspects related to a standard may lead to situations of confusion like in HEVC and MPEG-H 3D Audio.

Let’s consider the main steps of the MPEG process

The MPEG process assumed that the market would find a way to remunerate patent holders. This did happen, until patent pools stopped working as the HEVC case and MPEG 3D Audio case demonstrate. The MPEG-style commercial requirements are no match to the needs of the industry today.

In other words, MPAI adopts the following modifications of the steps of the MPEG standardisation process (in red the MPAI modifications)

The FWL is the business model to remunerate IPRs in the standard without values: no $, no %, no dates etc. It is obviously standard specific.

Thus, the MPAI policy becomes “any technology that proves its worth and is accompanied by a Framework Licence declaration”.

The MPAI process is a major improvement to the MPEG process because the big problem of simultaneously defining the business model and the price of the patented technologies, is split in two: the business model before work on the standard starts (doable because the functional requirements are known), and the monetary values after the work on the standard is finished (doable because every patent holder can make their assessment of the worth of their technology).

In a multi-polar world where there are multiple sources of coding standards, users can only be attracted if they know what they are committing to before work on the standard starts. It is no longer possible to promise technical wonders and, years later, make customers discover a business disaster.

MPAI offers a process that accelerates the practical use of standardised technologies benefitting industry and end users alike.