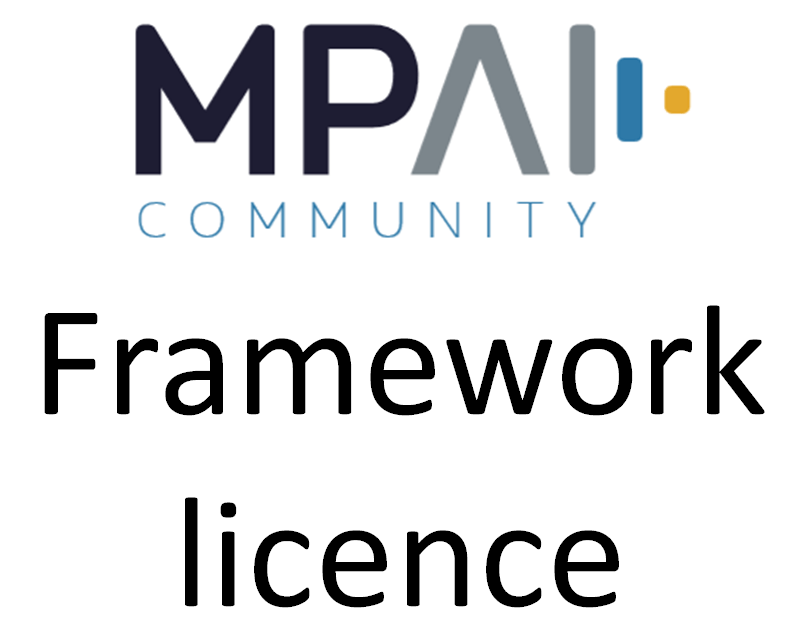 The main features of MPAI – Moving Picture, Audio and Data Coding by Artificial Intelligence – are the focus on efficient representation of moving pictures, audio and data in general using Artificial Intelligence technologies and the will to find a point where the interest of holders of IPR in technologies essential to a standard and the interest of users of the standard are equally upheld.

In this article I will analyse the principal tool devised by MPAI to achieve the latter goal, the framework licence.

The process used by MPEG to develop its standards used to be simple and effective. As there were just too many IPRs in video coding back in the late 1980s, MPEG did not even consider the possibility to develop a royalty free standard. Instead it assessed any technology proposed and added it to the standard if the technology provided measurable benefits. MPEG did so because it expected that the interest of industry users and IPR holders would converge to a point satisfactory to both. This did indeed happen by reviving the institute of patent pools.

Therefore, the MPEG process can be summarised by this sequence of steps

The brackets surrounding “Develop” indicate that MPEG has no business in that step. On the other hand, the entire process relied on the expectation that patent holders could be remunerated.

Lately, many including myself, have pointed out that last step of the process, has stalled. The fact that individually all patent holders declare to be willing to licence their patents at FRAND terms does not automatically translate into the only thing users need – a licence to use the standard.

A tour of existing licences

Conceptually a licence can be separated in two components. The first describes the business model that the patent holders apply to obtain their remuneration. The second determines the levels of remuneration.

Let’s take two relevant examples: the HEVC summary licences published by the two MPEG LA and HEVC Advance patent pools on their web sites where I have hidden the values in dollars, percentages and dates and replaced with variable. In the following you will find my summary. My wording is deliberately incomplete because my intention is to convey the essence of the licences and probably imperfect as I am not a lawyer. If you think I made a serious mistake or an important omission please send an email to Leonardo.

What is a framework licence?

Therefore, a framework licence does not, actually shall not (for antitrust reasons) contain any value of dollars, percentages and dates.

How does MPAI intend to use framework licences?

MPAI brings the definition of the business model part of a licence (that used to be done after an MPEG standard was developed) at the point in the process between definition of requirements and call for technologies. In other words, the MPAI process becomes

As was true in MPEG, MPAI does not have any business in the last step in brackets.

Let’s have a closer look at how a framework licence is developed and used. First of all, active MPAI members, i.e. those who will participate in the technical development, are identified. Active members develop the licence and adopt it by a qualified majority

What problem a framework licence solves

The framework licence approach is not a complete solution of the problem of providing a timely licence to data representation standards, it is a tool that facilitates reaching that goal.

When MPAI decides to develop a standard, it must know what purpose the standard serves, in other words it must have precise requirements. These are used to call for technologies but can also be used by IPR holders to define in a timely fashion how they intend to monetise their IP, in other words to define their business model.

Of course, the values of royalties, caps, dates etc. are important and IPR holders in a patent pool will need significant amounts of discussions to achieve a common view. However, unlike the HEVC case above, the potentially very significant business model differences no longer influence the discussions.

Users of the standard can know in advance how the standard can be used. The two HEVC cases presented above show that the licences can have very different business models and that some users may be discouraged from using – and therefore not wait for – the standard, if they know the business model. Indeed, a user is not only interested in the functional requirements but also in the commercial requirements. The framework licence tells the usage conditions, not the cost.

However, some legal experts think that the framework licence could include a minimum and maximum value of the licence without violating regulatory constraints. Again, this would not tell a user the actual cost, but a bracket.

More information on the framework licence can be found on the MPAI web site where the complete MPAI workflow is described, or from the MPAI Statutes.

A crisis, the causes and a solution