In 1987, a few months before MPEG was the established, ISO TC 97 Data Processing became the ISO/IEC Joint Technical Committee 1 (JTC 1) on Information Technology. With this operation the data processing industry, renamed information technology industry on the occasion, was able to concentrate on a single Technical Committee (TC) all standardisation activities needed by that industry, including those “electrical”, until then the exclusive purview of IEC.

Thirty-two years later, JTC 1 has become a very large TC, but inside IEC things have been all but static. A major achievement, dating back a couple of decades ago, has been the creation of Technical Committee 100 “Audio, Video and Multimedia systems and equipment”, that grouped activities until then scattered in different parts of IEC.

On the occasion of the IEC General Meeting that included meetings of many IEC TCs, a joint TC 100 and JTC 1 workshop was held in Shanghai on 2019/10/19. MPEG was invited to give a talk about how it develops standards and its most promising current projects. The title selected was an unambiguous “The world is going digital – MPEG did so 30 years ago”.

This article will talk about what I said in the first part of my speech: what drove the establishment of MPEG, how MPEG is organised, and main results produced by MPEG. There is a very short conclusion worth reading.

The MPEG story is a successful case of digitisation. Thirty years ago, the audio-visual distribution industry engaged in a process that, unlike what is often happening today, was based on international standards. But why did digitisation of the audio-visual distribution industry succeed? That was because of a number of reasons.

At that time standards were needed as they are needed today,. However, at that time, the prevailing attitude of the audio-visual sector was that every industry, country, company etc. should have its own “standard”. The MPEG standardisation way of prevailed over the “old way”. Today  international standards are used to compress audio, moving pictures (including 3D Graphics), and to deliver and consume audio-visual data.

MPEG standards were excellent in terms of quality and standardisation made the audio-visual digitisation technology accessible to all users from a plurality of sources. MPEG’s ability to attract all industry made itthe melting pot of the new global audio-visual distribution that eventually became the famed “industry convergence”.

Figure 1: Audio-visual distribution before and after MPEG

The figure applies specifically to MPEG-2 but it is also the conceptual foundation of the large majority of MPEG standards that followed MPEG-2. The repetition of the first success was made possible by the “MPEG business model”:

In the early MPEG days, the “MPEG industries” were those manufacturing devices (implementation industries) and those actually using the devices for their business (client industries). Both were main contributors to the MPEG standards. Today MPEG is quite different from 30 years ago because the context in which it operates has changed substantially. There is a growing role of companies who ow valuable technologies they contribute to MPEG standards but are unlikely to be manufacturers or users of the standard (technology industries), as depicted in Figure 2.

What is the inside of the machine that produces the MPEG standards? Judging from Figure 3 one could think that it is a very standard machine. 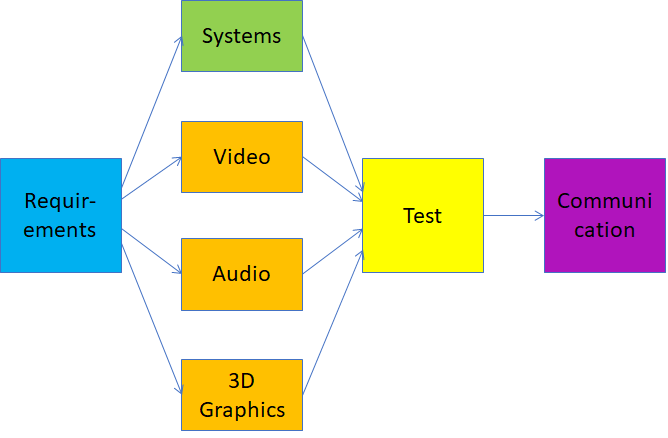 The Requirements subgroup develops requirements for the standards to be developed; 4 technical subgroups – Systems, Video (that includes two joints groups with ITU-T), Audio and 3D Graphics – develop the standards; the Test subgroup assesses the quality; and the Communication subgroup informs the world of the results.

That’s all? Well, no. One must look first at Table 1 to see the “interaction events” between the different subgroups that took place in the last 12 months during MPEG meetings. They were 68 in total, each lasting from one hour to half a day of joint meetings, each involving at least 2 subgroups and some 3 subgroups or more.

Table 1 describes the amount of interaction taking place inside MPEG but does not describe how interaction takes place. In Figure 4 the subgroups are represented as a circle surrounding “units” whose first letter indicates the subgroups they belong to. Units are temporary or stable entities within the subgroups who get together (indicated by the arrows) as orchestrated by the subgroup chairs meeting as “Technical Coordination”. 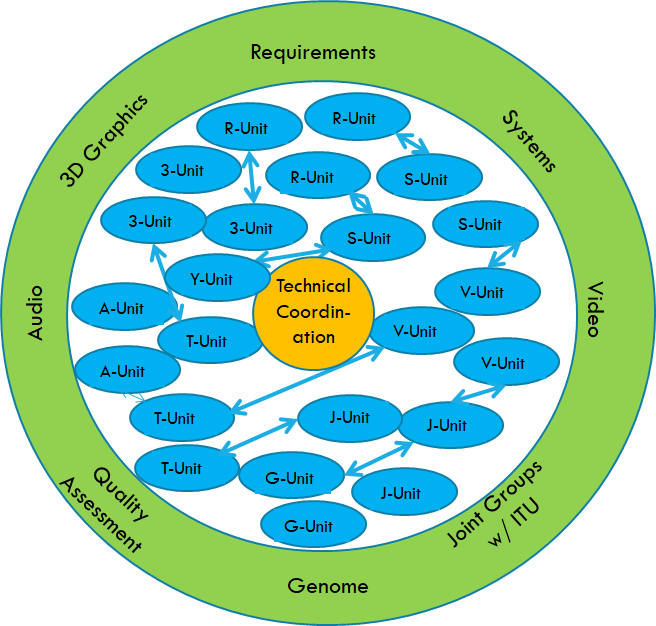 It is this ability to mobilise people with the right expertise that allows MPEG to create standards that can be used to make complete audio-visual systems, but can also be used independently (Figure 5).

MPEG standards are technology heavy. How does MPEG make decisions about which technology get into a standard?

The purpose of MPEG plenaries is to review and approve subgroup decisions. These may be challenged at MPEG plenaries (and this has happened less than 10 times in 30 years). Challenges are addressed by applying thoroughly and conservatively the ISO/IEC definition of consensus.

There is an additional aspect that must be considered: MPEG does not have a constituency because if it had one it would be forced to consider the interests of that industry to the possible detriment of other industries.

The success of MPEG standards

So far MPEG has produced ~180 standards. This would amount to an average of 6 standards per years. In practice it is much more because a standard is a living body that typically evolves to include many Amendments and is published multiple times incorporating those Amendments and Corrigenda. Figure 6 show how productive MPEG has been: in spite of being a working group it has produced more standards than any other JTC 1 Subcommittee.

Figure 6: MPEG has published more standards than any other JTC 1 SC

Table 3 lists the 7 areas in which its standards can be classified and maps each area to one of the MPEG standards. It is easy to see that compression and transport are the areas most populated by MPEG standards.

We should not forget that the life of a large share of the world population is constantly and pervasively affected by MPEG standards.

MPEG is a unique machine that has produced and counts on producing standards affecting the life of billions of people and wide swathes of industry. Industry and consumers have the right to expect that this machine is allowed to do its work and that no improvised apprentice tamper with it.

Why is there a battle around MPEG?