In The Mule, Foundation and MPEG, the latest article published on this blog, I wrote: In 30 years of MPEG, and counting? I somehow referred to the MPEG Mule when I wrote “Another thirty years await MPEG, if some mindless industry elements will not get in the way”. We may be close to know the fate of the MPEG Mule.”

We are nowhere close to knowing the fate of MPEG and in this article I will tell another episode of the saga.

In Which future for MPEG? I exposed my ideas about the future of MPEG based on a very simple reasoning. MPEG has developed global industry-agnostic digital-media standards that have led the media industry from analogue to digital, given opportunities to develop new business models and enabled the continuous expansion of the media industry. This is not a tale of the past but a reality that continues today with sustained production of digital media standards. The proof is in the record attendance last week of more than 600 MPEG members in Gothenburg.

Finally, as I wrote in MPEG and ISO, even taxi drivers know MPEG, demonstrating that the name MPEG does not just refer to a technology hidden in devices no one knows about but is imprinted in people’s minds.

Next to my proposal to leverage such a unique organisation making official the strategic role that MPEG has played for the last 30 years, there are many other proposals that can be summarised as follows

The problem of this argument is that, especially in the last few years, for whatever reasons, JPEG and MPEG have not collaborated. JPEG used to meet collocated with MPEG, but then decided to meet separately. This does not mean that MPEG has not worked for JPEG because it developed two standards for the transport of JPEG2000 and JPEG XS images on MPEG-2 Transport Stream (TS), the standard that transports digital television.

Starting from 1992 MPEG has developed 5 standards jointly with ITU-T Study Group 16 (SG16) and is now developing a 6th standard. Still ITU-T SG16 is not even part of ISO! Another example is that MPEG has developed 3 standards and is developing 3 more standards jointly with TC 276 Biotechnology. Here we are talking of an ISO Technical Committee whose mission is to develop standards for biotechnology that do not have anything to do with digital media (but the jointly developed standard – MPEG-G – is very much needed by TC 276 for their workflows)!

The second of these proposals is a further attempt at creating organisational bindings where none existed before because they were never needed. In a few words the proposal is: instead of becoming an independent SC of 600 members (larger than many Technical Committees) the MPEG subgroups should melt in the parent SC.

This proposal demonstrates that the proponents miss the basic understanding of what MPEG is. MPEG is an ecosystem of groups developing integrated standards whose parts can also be used independently. To achieve this result, MPEG has developed the organisation described in More standards – more successes – more failures. 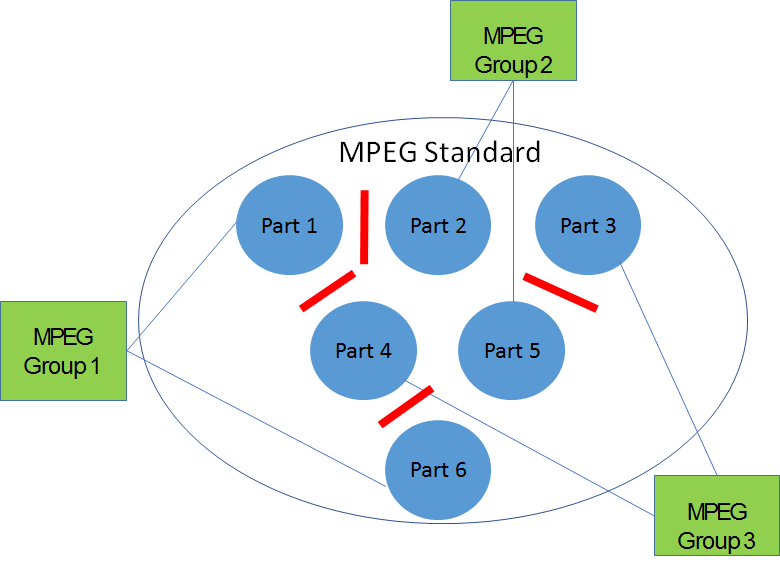 The parts of an MPEG standard (Blue circles) are typically “owned” (i.e. developed) by different groups, but there is a need to provide a “glue” (red lines in Figure 1) between the different parts of a standard if the standard is to be used as an integrated whole. The glue is provided by MPEG subgroups assisted by ad hoc groups, breakout groups and joint meetings and orchestrated by studies made at chairs meetings.

Dumping the MPEG organisation to melt in the parent SC will lead to the loss of the glue that make MPEG standards uniquely effective and successful in the industry. The components of a disbanded MPEG will not deliver as before in the new environment. Sure, given time, a new structure can emerge, but it is vital that a new structure operate now at same level of performance of MPEG, not in some years. Competition to MPEG is at the gates.

The third of these proposals is to give the parent SC the role of strategic planning, technical coordination and external relations that MPEG has – successfully – carried out for the last 30 years. This proposal is so naïve that not many words are needed to kill it (in Japanese you would use the word 黙殺, literally meaning “killing with silence”). For 30 years the parent organisation has performed administrative functions and, as much as you cannot make a racehorse from a horse who has pulled a cart for years, because its master so decides, in the same way the parent SC cannot become a strategic planner, a technical coordinator or an external relation manager. After years a new structure and modus operandi can very well settle (MPEG did not become what it is in a day), but in the meantime the cohesion that has kept MPEG components together will wither never to come back again and industry will just spurn its standards.

The fourth and last proposal (in this article, because there are many more) comes from a Non-Performing Entity (NPE). Appoint a new parent committee chair, disbands what exists today and create a new organisation from scratch. Sure, if the intention is to keep with a leash a tame committee whose sole purpose is to add IP in standards without any consideration for their industrial value, this is an excellent proposal.

The matter was discussed for hours. Hamlet had to be called from neighbouring Denmark to decide. Whose skull did he use?

What is MPAI going to do?

The talents, MPEG and the master