The MPEG work plan at a glance

Figure 1 shows the main standards that MPEG has developed or is developing in the 2017-2023 period. The figure is organised in 3 main sections: 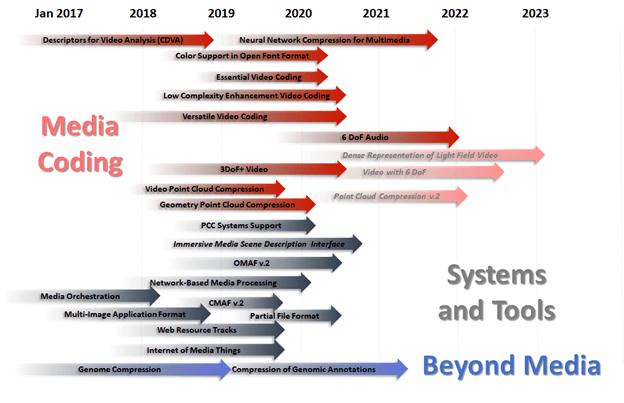 Disclaimer: dates in the figure and in the following are all planned.

Navigating the areas of the MPEG work plan

In the Video coding area MPEG is currently developing specifications for 4 standards: MPEG-H, -I, -5 and -CICP) and is conducting explorations in advanced technologies for immersive visual experiences.

Part 2 – High Efficiency Video Coding 4th edition specifies a profile of HEVC that will have an encoding of a single (i.e. monochrome) colour plane and will be restricted to a maximum of 10 bits per sample, as done in past HEVC range extensions profiles, and additional Supplemental Enhancement Information (SEI) messages, e.g. fisheye video, SEI manifest, and SEI prefix messages.

Part 3 – Versatile Video Coding, currently being developed jointly with VCEG, MPEG is working on the new video compression standard after HEVC. VVC is expected to reach FDIS stage in July 2020 for the core compression engine. Other parts, such as high level syntax and SEI messages will follow later.

This standard is still awaiting approval, but MPEG has already obtained all technologies necessary to develop standards with the intended functionalities and performance from the Calls for Proposals (CfP).

MPEG experts are collaborating in the development of support tools, acquisition of test sequences and understanding of technologies required for 6DoF and lightfields.

In the Audio coding area MPEG is working on 2 standards (MPEG-D, and -I).

Part 4 Immersive Audio. As MPEG-H 3D Audio already supports a 3DoF user experience, MPEG-I builds upon it to provide a 6DoF immersive audio experience. A Call for Proposal will be issued in October 2019. Submissions are expected in October 2021 and FDIS stage is expected to be reached in April 2022. Even though this standard will not be about compression, but about metadata as for 3DoF+ Visual, we have kept this activity under Audio Coding.

In the 3D Graphics Coding area MPEG is developing two parts of MPEG-I.

In the Font coding area MPEG is working on a new edition of MPEG-4 part 22.

In the Genome coding area MPEG has achieved FDIS level for  the 3 foundational parts of the MPEG-G standard:

In October 2019 MPEG will complete Part 4 – Reference Software and Part 5 – Conformance. In July 2019 MPEG will issue a Call for Proposals for Part 6 – Genomic Annotation Representation.

Compression of this type of data is motivated by the increasing use of neural networks in many applications that require the deployment of a particular trained network instance to a potentially large number of devices, which may have limited processing power and memory.

MPEG has restricted the general field to neural networks trained with media data, e.g. for the object identification and content description, and is therefore developing the standard in MPEG-7 which already contains two standards – CDVS and CDVA – which offer similar functionalities achieved with different technologies (and therefore the standard should be classified under Media description).

Media description is the goal of the MPEG-7 standard which contains technologies for describing media, e.g. for the purpose of searching media.

In the Media Description area MPEG has completed Part 15 Compact descriptors for video analysis (CDVA) in October 2018 and is now working on 3DoF+ visual.

Part 7 – Immersive Media Metadata will specify a set of metadata that enable a decoder to provide a more realistic user experience in OMAF v2. The FDIS is planned for July 2021.

In the System support area MPEG is working on MPEG-4 and -I.

In MPEG-H MPEG is working on

Part 10 – MPEG Media Transport FEC Codes. This is being enhanced with the Window-based FEC code. FDAM is expected to be reached in January 2020.

Part 6 – Immersive Media Metrics specifies the metrics and measurement framework in support of immersive media experiences. FDIS stage is planned to be reached in July 2020.

Part 2 – Systems continues to be a lively area of work 25 years after MPEG-2 Systems reached FDIS. After producing Edition 7, MPEG is working on two amendments to carry two different types of content

In MPEG-B MPEG is working on two new standards

In MPEG-DASH MPEG is working on

MPEG-A ISO/IEC 23000 Multimedia Application Formats is a suite of standards for combinations of MPEG and other standards (only if there are no suitable MPEG standard for the purpose).  MPEG is working on

The Application Programming Interfaces area comprises standards that make possible effective use of some MPEG standards.

Part 8 – Network-based Media Processing (NBMP), a framework that will allow users to describe media processing operations to be performed by the network. The standard is expected to reach FDIS stage in January 2020.

Part 1 – IoMT Architecture, expected to reach FDIS stage in October 2019. The architecture used in this standard is compatible with the IoT architecture developed by JTC 1/SC 41.

MPEG uses acronyms for its standards and industry knows them by them. Here you will find the full list of MPEG standards ordered by the 5-digit ISO numbers.

MPEG-1 ISO/IEC 11172 Coding of moving pictures and associated audio for digital storage media at up to about 1,5 Mbit/s

What is the difference between an image and a video frame?