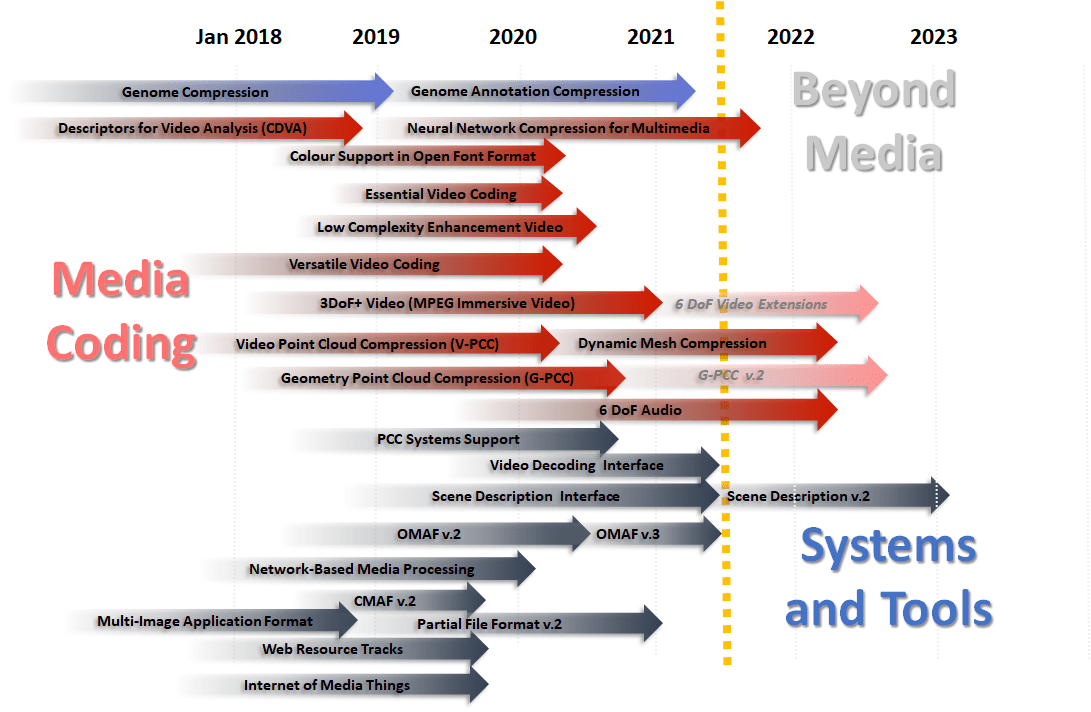 It is a now a few months since I last talked about the standards being developed  by MPEG. As the group dynamics is fast, I think it is time to make an update about the main areas of standardisation: Video, Audio, Point Clouds, Fonts, Neural Networks, Genomic data, Scene description, Transport, File Format and API. You will also find a few words on three exploration that MPEG is making

Video continues to be a very active area of work. New SEI messages are being defined for HEVC while there a high activity in VVC that is due to reach FDIS in July 2020. Verification Tests for VVC have not been carried out yet, but the expectation is that VVC will bring compression of video of about ~1000, as can be seen from the following table where bitrate reduction of a standard is measured with respect to that of the previous standard. MPEG-1 bitrate reduction with respect to uncompressed video. VVC bitrate reduction is estimated.

MPEG-I OMAF already supports (2018) 3 Degrees of Freedom (3DoF), where a user’s head can yaw, pitch and roll, but the position of the body is static. However, rendering flat 360° video, i.e. supporting head rotations only, may generate visual discomfort especially when rendering objects close to the viewer.

6DoF enables translation movements in horizontal, vertical, and depth directions in addition to 3DoF orientations. The translation support enables interactive motion parallax giving viewers natural cues to their visual system and resulting in an enhanced perception of volume around them.

MPEG is currently working on a video compression standard (MPEG-I Part 12 Immersive Video – MIV) that enables head-scale movements within a limited space. In the article On the convergence of Video and 3D Graphics I have provided some details of the technology being used to achieve the goal, comparing it with the technology used for Video-based Point Cloud Compression (V-PCC). MIV is planned to reach FDIS in October 2020.

Audio experts are working with the goal to leverage MPEG-H 3D Audio to provide a full 6DoF Audio experience, viz. where the user can localise sound objects in horizontal and vertical planes, and perceive sound objects’s loudness changes as a user moves around an audio object, sound reverberation as in a real room and occlusion when a physical object is interposed between a sound source and a user.

Evaluation of proposals will be done via

Currently this is the longest term MPEG-I project as FDIS is planned for January 2022.

MPEG Immersive Video and Audio share a number of features. The most important is the fact that both are not “compression standards”, in the sense that they use existing compression technologies on top of which immersive features are provided by metadata that will be defined by Immersive Video (part 12 of MPEG-I) and Immersive Audio (part 5 of MPEG-I). MPEG-I Part 7 Immersive Media Metadata will specify additional metadata coming from the different subgroups.

Video-based Point Cloud Compression is progressing fast as FDIS is scheduled for January 2020. The maturity of the technology, suitable for dense point clouds (see, e.g. https://mpeg.chiariglione.org/webtv?v=802f4cd8-3ed6-4f9d-887b-76b9d73b3db4) is reflected in related Systems activities that will be reported later.

Neural Networks are a new data type. Strictly speaking is addressing the compression of Neural Networks trained for multimedia content description and analysis.

NNR, as MPEG experts call it, has taken shape very quickly. First aired and discussed at the October 2017, a Call for Evidence (CfE)  was issued in July 2018 and a Call for Proposal (CfP) issued in October 2018.  Nine responses were received at the January 2019 meeting that enabled the group to produce the first working draft in March 2019. A very active group is working to produce the FDIS in October 2020.

With MPEG-G parts 1-3 MPEG has provided a file and transport format, compression technology, metadata specifications, protection support and standard APIs for the access of sequencing data in the native compressed format. With the companion parts 4 and 5 reference software and conformance, due to reach FDIS level in April 2020, MPEG will provide a software implementation of a large part of the technologies in parts 1 to 3 and the means to test an implementation for conformity to MPEG-G.

January 2020 is the deadline for responding to the Call for Proposals on Coding of Genomic Annotations. The call is in response to the need of most biological studies based on sequencing protocols to attach different types of annotations, all associated to one or more intervals on the reference sequences, resulting from so-called secondary analyses. The purpose of the call is to acquire technologies that will allow to provide a compressed representation of such annotation.

MPEG’s involvement in scene description technologies dates back to 1996 when it selected VRML as the starting point for its Binary Format for Scenes (BIFS). MPEG’s involvement continued with MPEG-4 LASeR, MPEG-B Media Orchestration and MPEG-H Composition Information.

MPEG-I, too, cannot do without a scene technology. As for the past, MPEG will start from an existing specification – glTF2 (https://www.khronos.org/gltf/) – selected because it is an open, extensible, widely supported with many loaders and exporters and enables MPEG to extend glTF2 capabilities of for audio, video and point cloud objects.

Transport is a fundamental function of real-time media and MPEG continues to develop standards, not just for its own standards, but also for JPEG standards (e.g. JPEG 2000 and JPEG XS). This is what MPEG is currently doing in this vital application area:

The ISO-based Media File Format is an extremely fertile standards area that extends over many MPEG standards. This is what MPEG is doing in this vital application area:

This area is more and more being populated with MPEG standards

MPEG is carrying out explorations in areas than may give rise to future standards: 6DoF, Dense Light Fields and Video Coding for Machines (VCM). VCM is motivated by the fact that, while traditional video coding aims to achieve the best video/image under certain bit-rate constraints having humans as consumption targets, the sheer quantity of data being/to be produced by connected vehicles, video surveillance, smart cities etc. makes the traditional human-oriented scenario inefficient and unrealistic in terms of latency and scale.

Twenty years ago the MPEG-7 project started the development of a comprehensive set of audio, video and multimedia descriptors. Other parts of MPEG-7 have added other standard descriptions of visual information for search and analysis application. VCM may leverage that experience and frame it in the new context of expanded use of neural networks. Those interested can subscribe to the Ad hoc group on Video Coding for Machines at https://lists.aau.at/mailman/listinfo/mpeg-vcm and participate in the discussions at mpeg-vcm@lists.aau.at.

MPEG has developed several standards in the framework of MPEG-21 media ecommerce framework addressing the issue of digital licences and contracts. Blockchain can execute smart contracts, but is it possible to translate an MPEG-21 contract to a smart contract?

Let’s consider the following use case where User A and B utilise a Transaction system that interfaces with a Blockchain system and a DRM system. If the transaction on the Blockchain system is successful, DRM System authorises User B to use the media item. 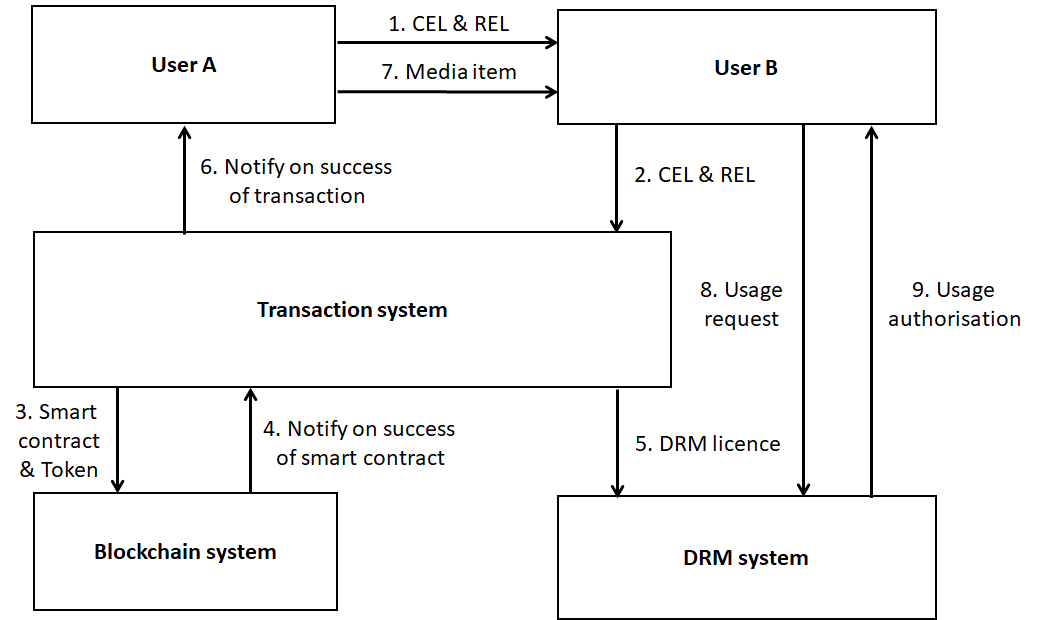 In this use case, Users A and B can communicate using the standard CEL and REL languages, while Transaction system is tasked to interface with Blockchain system and DRM system.

Mechanical systems are become more and more sophisticated in terms of functionalities but also in terms of capability to generate data. Virgin Atlantic says that a Boeing 787s may be able to create half a terabyte of data per flight. The diversity of data generated by an aircraft makes the problem rather challenging, but machine tools are less complex machines that may still generate 1 Terabyte of data per year. The data are not uniform in nature and can be classified in 3 areas: Quality control, Management and Monitoring.

There are data available to test what is means to process machine tool data. 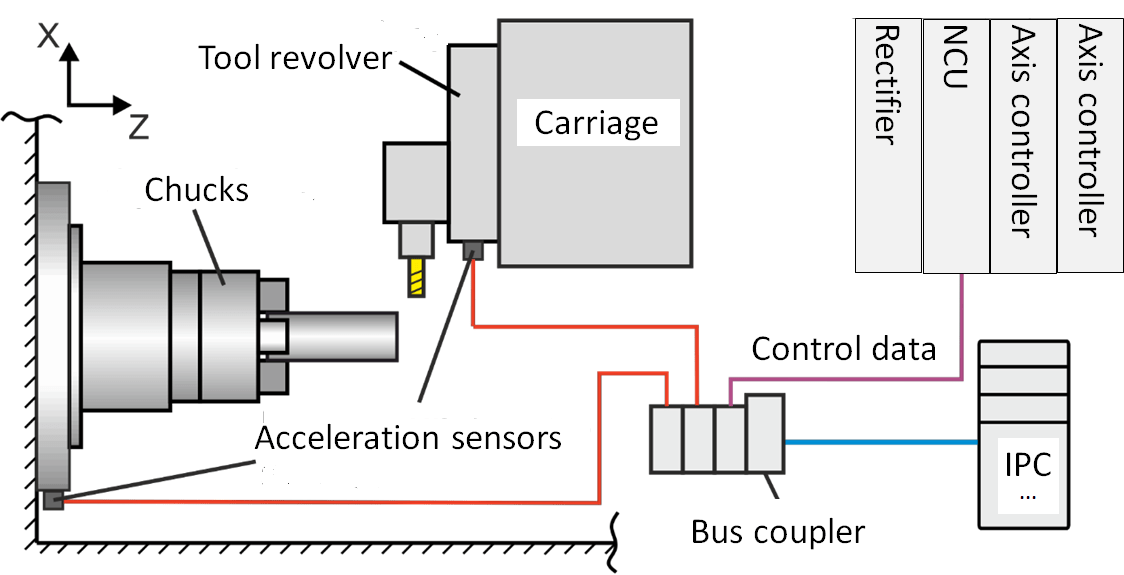 MPEG is deeply engaged in compressing two strictly non-media data: Genomic and Neural Networks, even though the latter is currently considered as a compression add-on to multimedia content description and analysis. It is also exploring compression of machine tool data.

The figure graphically illustrates the current MPEG work plan. Dimmed coloured items are not (yet) firm elements of the workplan.

MPEG is a big thing. Can it be bigger?