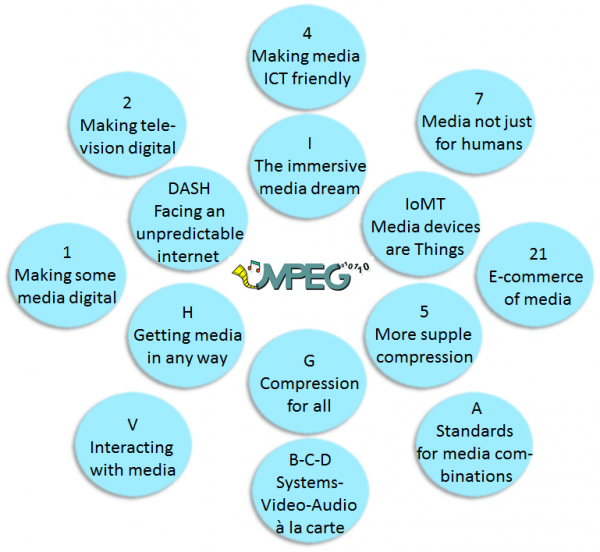 In the parable of the Talents the Gospel tells the story of a master who entrusts 5 talents (a large amount of money at that time) to one servant and 2 talents to another before leaving for a long travel. The first servant works hard and doubles his talents, while the second plays safe and buries the talents. When the master returns, he awards the first servant and punishes the second.

Thirty-one years ago, MPEG was given the field of standards for coding of moving pictures and audio to exploit. Now the master comes. To help him make the right judgement about the use of the the talents that he gave, I will briefly review the milestones reached in these years. Of course, I am not going to revisit all the MPEG standardisation areas developed in the last 31 years. There are several posts in this blog (see the list at the bottom of the page) and in the book A vision made real – Past, present and future of MPEG), I will just take some snapshots of the major achievements.

Before MPEG-1 there had been attempts at making media digital, but MPEG-1 was the first standards that made the media really digital in consumer products: Video CD brought movies on CD, Digital Audio Broadcasting (DAB) made the first digital radio and MP3, well, that simply created the new music experience triggering a development that continues to this day. This was possible thanks to the vision that a global audio-video-systems standard would take over the world. It did.

MPEG-1 did not make all media digital, television was the major exception. This was an intricate world where politics, commercial interests, protection of culture and more had defied all attempts made by established standards organisations. MPEG applied its recipe and produced an effective MPEG-2 specification that added DSM-CC to support TV distribution on cable. Sharp vision, excellent technology and unstinting promotion efforts delivered the result.

MP3 encoding and decoding on PC was achieved in the early days of the standard, but an announcement by Intel that MPEG-2 video could be decoded in real time on their x86 chips made headlines. The real marriage between media and ICT – defined as IT + mobile – was the planned result of MPEG-4. Two video standards in sequence (Visual and AVC), the ultimate audio format (AAC in all its variations), the File Format (ISO Based Media File Format – ISOBMFF), Fonts (Open Font Format) and a lot of other standard technologies still largely in use today in spite of the fast-evolving technology scenario.

Media not just for humans

At the beginning of the new millennium MPEG had collected enough standards that the following question was asked: how can we combine a set of content items each represented by MPEG standards or, when MPEG standards are not available, by other standards, in a standard way? This was the start of MPEG-A, a suite of standards Multimedia Application Formats (MAF). Examples are Surveillance AF, Interactive Music AF (IMAF), Augmented Reality AF ARAF), Common Media AF (CMAF) and Multi-Image (MIAF). CMAF is actually affecting millions of streaming devices today.

With the main elements of the MPEG-4 standard in place, MPEG had the need for systems, video and audio standards without being able to define a unified standard. This was the birth of 3 standard suites: MPEG-B (Systems), MPEG-C (Video) and MPEG-D (Audio). Among the most relevant standards we mention Common encryption format (CENC) for ISOBMFF and MPEG-2 TS, Reconfigurable Video Coding (RVC) and Unified speech and audio coding (USAC). The last is the only standard that is capable to encode audio and speech with a quality superior to the best audio codec and the best speech codec.

Getting media in any way

Broadcasting was the first system for mass distribution of media – audio and video. Originally, it was strictly one way, cable added return information, then the telecommunication networks provided the technical means to achieve full two-way distribution. With its MPEG-2 standard, MPEG provided the full stack from transport up. This was universally adopted by broadcasting, but the Internet Protocol (IP) was the transport selected for telecom distribution. With MPEG-H, MPEG provided a unified solution where content meant for one-way distribution can seamlessly distributed in a two-way fashion. With this Systems-Video-Audio based suite of standards MPEG has achieved unification of media distribution.

Probably most readers have never heard of the Asynchronous Transfer Mode (ATM), designed to transport fixed-size packets on a fixed route between two points before transferring data. ATM’s AAL1 could have guaranteed bandwidth, but had to give way to the leaner and cheaper IP. The successful digitatisation we live in is paid by unpredictability. You start with a good bandwidth between you and the source, but a moment later the bandwidth available is cut by half. A disaster for those who want to provide reliable services. MPEG-DASH is the standard that allows a consumer device to request (video, mostly) information of the appropriate bitrate matching the bitrate made available by the network at a given instant.

MPEG has dreamt for a quarter of century to immerse in media ?. In the second half of the 1990’s MPEG developed the MPEG-2 Multiview Profile, the first attempt at providing the two eyes of a viewer with the kind of different information the eyes receive when they are hit by the light reflected by an object. The latest attempts were the Multiview and 3D extension attempts to HEVC. Technology is maturing, but many the context is far from stable as companies providing solution come and go. MPEG is developing standards in this slippery space based on 6 keypoints:

The Internet of Things (IoT) paradigm is well known but how can we apply the general IoT paradigm to media? MPEG-IoMT (Internet of Media Things) is an MPEG standard suite providing interfaces, protocols and associated media-related information representations that enable advanced services and applications based on human to device and device to device interaction. IoMT will be the platform on which new standards such as Video Coding for Machines will be hosted.

MPEG video coding standards have been hugely successful. However, in certain domain, such as internet streaming adoption encounters non-technical difficulties. Essential Video Coding (EVC) is the standard that will yield excellent performance with the prospect of an easier licensing.

MPEG has developed an impressive number of technologies whose focus is on compression and transport of data. Some are strictly media-related. Others, however, have a more general applicability. That this is true and can be implemented is demonstrated by MPEG-G, a standard that allows efficient transport of DNA reads obtained by high-speech sequencing machines. MPEG-G compression is lossless and will allow savings on storage and transmission costs and in access to DNA information for clinical analyses.

The master had a really long travel – 31 years – but has finally returned. Will he say to MPEG: “Well done, good and trustworthy servant; you have been trustworthy in a few things, I will put you in charge of many things; enter into the joy of your master” or will he say: “throw this lazy servant into the outer darkness, where there will be weeping and gnashing of teeth”?

What is the state of MPAI work?

Design and build the future of MPEG