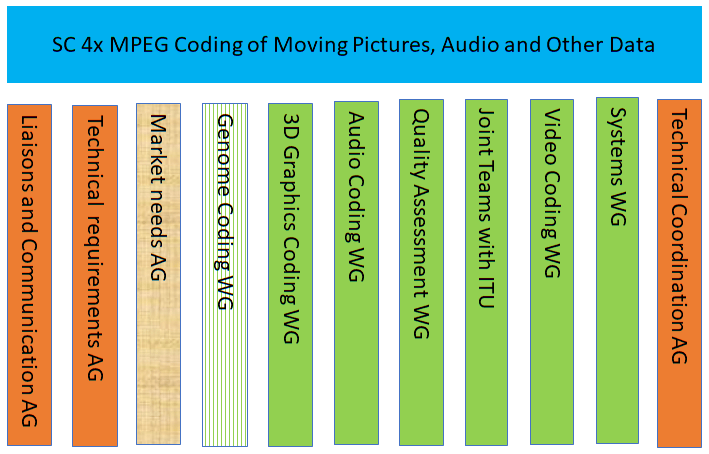 A group of MPEG and JPEG members have developed a proposal seek to leverage the impact MPEG and JPEG standards have had on thousands of companies and billions of people all over the world.

Why we need to do something

So far MPEG and JPEG were hosted by Subcommittee 29 (SC 29). The group thinks that it is time to revitalise the 27-year old SC 29 structure. To achieve the goal, let’s make the following considerations:

A Strengths-Weaknesses-Opportunities-Threats (SWOT) analysis has been carried out on MPEG. The results point to the need for MPEG

What should be done

This is the proposal

The benefits of the proposal

The proposal brings a significant number of benefits

The title and scope of SC 4x

Upon approval by JTC 1 and ratification by the TMB, SC 4x will assume the following

Joint Working Groups (JWG) may be established if the need for common standards with other ISO/IEC committees is identified.

SC 4x will constantly monitor the state of standards development and adapt its structure accor­dingly, including by establishing new WGs, e.g. on standards for other data types.

Title and scope of SC 29

Upon approval by JTC 1, SC 29 will change its title and scope as follows:

The structure of SC 29

(the following is a first attempt at defining the SC 29 structure after creation of SC 4x, using the current SG structure of WG 1)

Why MPEG and JPEG do not work together?

This is a reasonable question, and has a simple answer. They can and should, however, the following should be taken into consideration

There is no reason to believe that the same should not apply to such media types as point cloud and lightfield. The still picture coding mode of a dynamic (time dependent) point cloud or lightfield coding scheme uses coding tools from the general coding scheme, not those independently developed for images.

A vision made real – Past, present and future of MPEG

This is ISO – An incompetent organisation