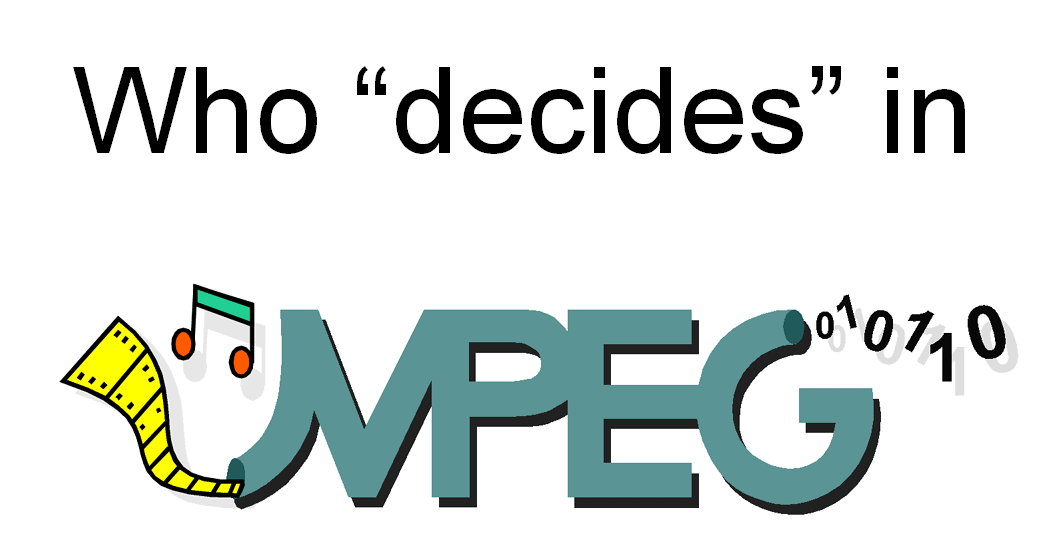 If MPEG were a typical company, the answer to this question would be simple. Persons in charge of different levels of the organisation “decide”. But MPEG is not a company and there is no chain of command where A tells B to do C or else.

Decisions are made, but how? As an autocracy, an oligarchy or a democracy? To answer these questions, let’s first see how the work in MPEG is organised.

The convenor chairs the 3 plenary sessions.

So, where are decisions made?

To answer this question let’s see how the technical work is done in the subgroups: Requirements, Systems, Video (including groups in collaboration with ITU-T), Audio, 3D Graphics and Tests. This is the rough assignment of responsibilities:

It is clear that decisions are really made by subgroups, but how?

The main ingredients of decisions by technology development groups are input contributions by members and their assessment made by the specific subgroup. Evidence must be brought that a technology does what the proponents claims it does and the main tool to achieve this is called “Core Experiment”. This is carried out by the proponent and at least another independent participant.. The results from the two must be compatible and prove that the technology brings gains to be accepted into the standard.

The decisions of the technology development groups are not easy, but getting to a decision can be achieved in a structured way because technology plays an overriding role. Definitely less structured is the process managed by the Requirements group, done just by itself or jointly with a technical group. The decisions to be made are of the type: “does this proposal for new work make sense” or “is this profile needed”?

The question “does this proposal make sense” leaves ample margins for decision because a new technology may be in competition with another existing technology, can be immature, addresses a questionable need etc. MPEG tends to be open to new proposals based on the principle that if someone needs something, why should those unconcerned prohibit the work? After all, the task of MPEG is not to make a “decision” for the new work to start, but only to make a preliminary assessment of a proposal so that a formal proposal for a new work item can be made and voted by National Bodies.

So far, all MPEG proposals for new standards have passed the ISO acceptance criterion of simple majority of P members in the committee approving the proposal.

Adoption of a profile can also be a really tricky matter. Profiles are levels of performance, typically enabled by the presence of technologies in the profiles, required by certain application domains. How much is the profile driven by technology and how much by the market? Discussions may drag on for a long time but eventually a decision must be made. This one is a real decision because the profile becomes part of the standard.

In ISO, to which MPEG belongs, decision must be made by consensus. The ISO definition of consensus is

General agreement, characterized by the absence of sustained opposition to substantial issues by any important part of the concerned interests and by a process that involves seeking to take into account the views of all parties concerned and to reconcile any conflicting arguments.

Therefore MPEG subgroups make decisions based on this definition of consensus.

What about the exception made at plenaries I was talking about before? It may happen – and probably it did happen less that 10 times in the 30 years of MPEG history – that the party whose wish was overruled by a decision made by a subgroup based on the above definition of consensus, challenges the subgroup consensus at the Friday plenary. The plenary applies the definition of consensus in a very conservatory way to determine if the challenge has to be accepted or the subgroup decision is confirmed.

We can now see that the question “is MPEG an autocracy, an oligarchy or a democracy?” is the wrong question. The right one is the title of this article “who decides in MPEG”. The answer is: MPEG members, if they want to decide. If not the chairs or the convenor have the task of finding a way to a consensus or else declare that no consensus was found. Then, no decision is made.