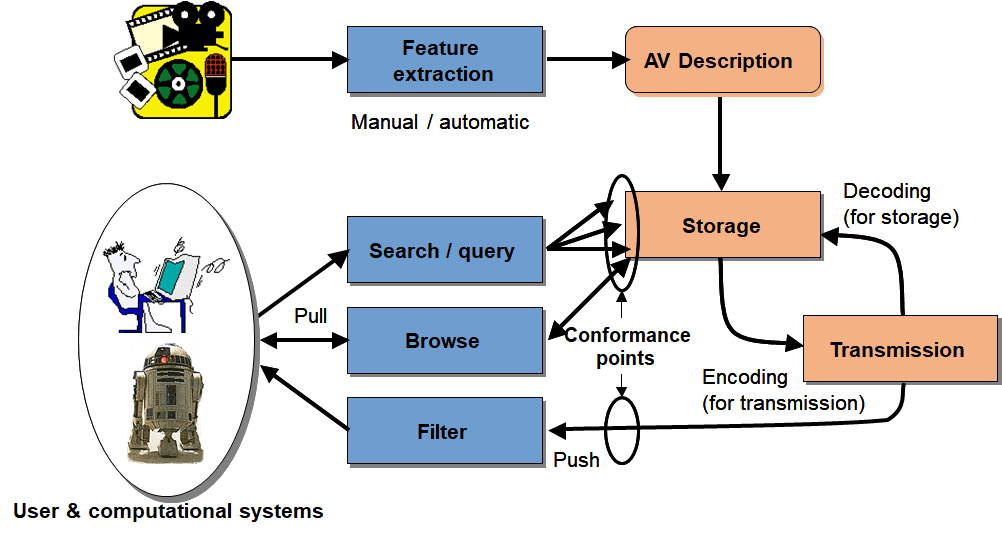 A group of people caring about the future of MPEG has established MPEG Future. According to the MPEG Future Manifesto, the group plans to

In this article I would like to contribute to item 4 “Further improve the connection between industry and users, and the MPEG standards group”. I will examine what MPEG currently does or plans to do in the area of Video and Point Cloud compression and will solicit feedbacks and comments from the MPEG Future community.

Why is MPEG engaged in 6 visual coding projects?

In 30 years, the audio-visual market has evolved a lot and the mantra of “one single video compression (albeit with profiles and levels) fits all needs” no longer holds true. Users have different and often incompatible requirements:

In 12 months the 6 MPEG projects described will all gradually achieve FDIS level and industry will take over. But MPEG does not only have these 6 projects in store. In the exploration pipeline MPEG has 4 more activities that may become projects.

The release of V-PCC and G-PCC does not mean that point cloud compression activitieswill stop. MPEG must listen to what industry and users will say about the first release of these standards and will add what is required to achieve more satisfactory user experiences.

As MPEG in Point Cloud Compression is still in the learning curve, expert more breakthroughs.

With this standard MPEG expects to be able to provide “unrestricted” immersive navigation where users can not only yaw, pitch and roll their heads (as in 3DoF) but move in the 3D space as well. The project is connected with the current 3DoF+ project in ways that are still to be fully determined.

This exploration is driven by the increasing number of applications that capture video for (remote) consumption by a machine, such as connected vehicles, video surveillance systems, and video capure for smart cities. The fact that the user is a remote machine does not change the fact that transmission bandwidth is often at a premium and compression is required. However, unlike traditional video coding where users expect high visual fidelity, in video coding for machines, “users” expect high fidelity of the parameters that will be processed by the machine users.  The bold idea of VCM is to have a unified video coding system for machines, where one type of machine is human. Technology is expected to be uniformly based on neural networks.

As noted here, however, VCM is not an entirely new field for MPEG. Twenty years ago, MPEG was working on MPEG-7 (multimedia description) and a figure of that time (below) clearly depicts what MPEG had in mind: MPEG-7 was eminently targeted to searching and browsing applications but the users were both humans and machines.

The MPEG Future community should react

MPEG Future participants have a role to play in providing feedbacks on the future of video and point cloud coding. They can be in 3 different directions

This will not be the end of the involvement of the MPEG Future community. However, it will be a big step forward.