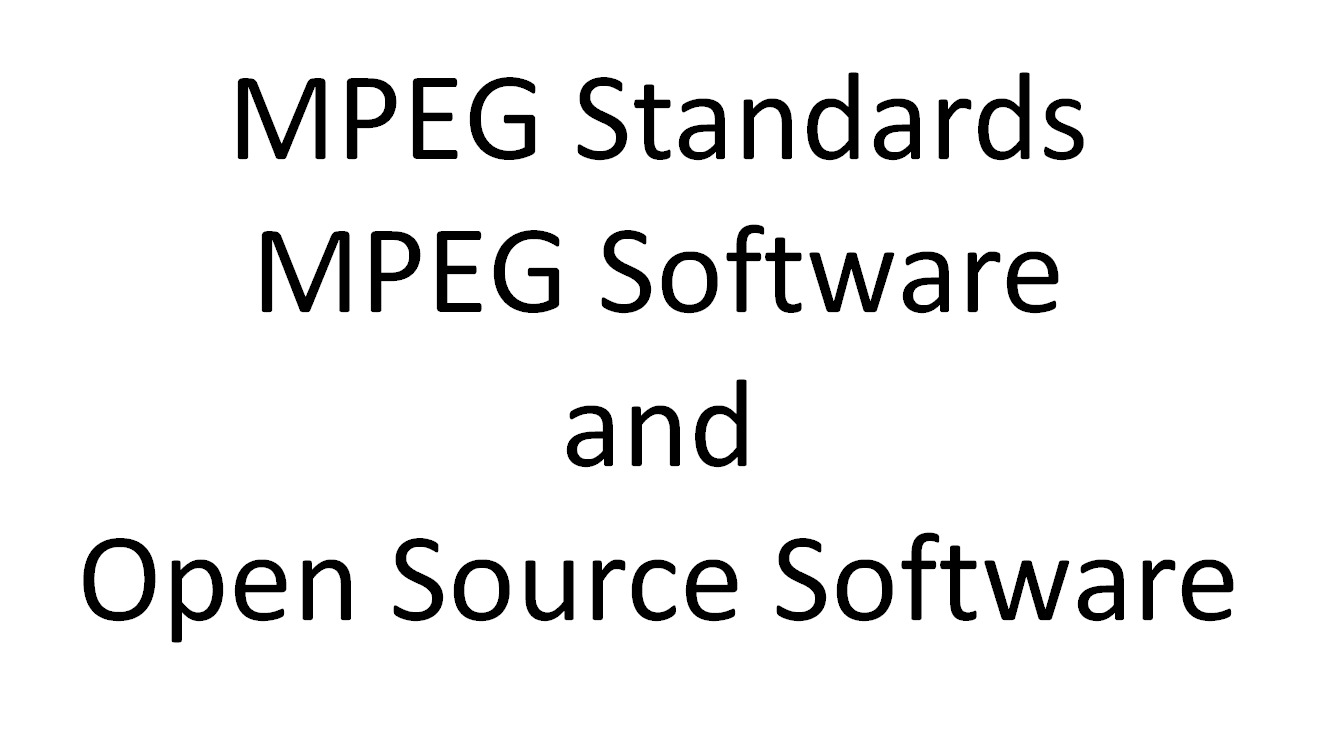 The MPEG trajectory is not the trajectory of an Information Technology (IT) group. Today software plays a key role in MPEG standard development. However, MPEG it is not an IT group. For MPEG, software is a tool to achieve the goal of producing excellent standards. But software remains a tool. Clearly, because MPEG assembles so many industries, with so many different agendas. There are MPEG members for which software is more than a tool.

In this article I will explore the relationship of MPEG with software and, in particular, Open Source Software.

In my early professional days I had the opportunity to be part of an old-type ICT standardisation, the European COST 211 project. A video codec specification (actually more than that, because it contained Systems aspects as well) was later submitted to and became a Recommendation of CCITT (Today ITU-T) with the acronym and title H.120 – Codecs For Videoconferencing Using Primary Digital Group Transmission.

That happened in the years around 1980. Ten years later, MPEG started the development of the MPEG-1 Video and then the MPEG-2 Video standards using a different method.

MPEG assembled the first MPEG-1 Video Simulation Model (VM) at MPEG10 (1990/03). The VM was comparable with the H.120 evolving specification because it was a traditional textual description. At MPEG12 (1990/08), MPEG started complementing the text of the standard with pseudo C-code because people accustomed to write computer programs found it more natural to describe the operations performed by a codec with this language than using words.

In MPEG-1 and MPEG-2 times active participants developed and maintained their own simulation software. Some time later, however, it was decided to develop reference software, i.e. a software implementation of the MPEG-1 standard.

Seen with the eyes of a software developer, the process of standard development in MPEG-1 and MPEG-2 times was rather awkward, because the – temporally overlapping – sequence of steps was:

People of the early MPEG days used software – and quite intensely – because that was a tool that cut the time it would take to develop the specification by orders of magnitude while offering the opportunity to obtain a standard with better performance.

Conformance testing and its “tool” reference software is an essential add-on to the standard because it gives users the freedom to make their own implementation and enables the creation of ecosystems of interoperable implementations.

OSS is a very large and impactful world for which the software is not the tool to achieve a goal but the goal itself. Those adopting the Gnu’s Not Unix (GNU) General Public License (GPL) grant some basic rights to users of their software they call “Free”. The terms can be (roughly) summarised as

in exchange of a commitment of the user to

Two additional issues should be borne in mind:

Development of the MPEG-4 Visual standard took another important turn, one that marked the convergence of the way telecom, broadcasting and consumer electronics on one side and information technology on the other side developed.

Unaware of the formalisation of the OSS rules that were already taking place in the general IT world, MPEG made the decision to develop the MPEG-4 reference software collaboratively because

MPEG-4 Visual had only one person in charge of the Test Model. All new proposals were assessed and, if agreed, converted to Core Experiments. If at least two participants from two different institutions brought similarly convincing improvement results, the proposal would be accepted and added to the TM.

Therefore the MPEG-4 software was no longer just the tool to develop the standard, it became the tool to make products based on the standard, but not necessarily the only one. Therefore a reversal of priorities was required because the standard in textual form was still needed, but many users considered the standard expressed in a programming language as the real reference. This applied not just to those making software implementations, but often to those making more traditional hardware-based products and VLSI designs as well.

Therefore it was decided that the software version of the standard should have the same normative status as the textual part. This decision has been maintained in all subsequent MPEG standards.

While the previous approach where every participant had their own implementation of the TM did not raise the issue of “who owns the software?”, the new approach did. MPEG resolved that with the following rules labelled as “copyright disclaimer”:

More recently, MPEG has started using a modified version of the Berkeley Software Distribution (BSD), a licence originally used to distribute a Unix-like operating system. This licence, originally called “MXM licence” from the name of MPEG-M part 2 standard “MPEG Extensible Middleware (MXM)” simply says that code may be used as prescribed by the BSD licence with the usual disclaimer that patents are not released. This new licence is particularly interesting for software companies that do not want to have liabilities when using software not developed internally.

MPEG and OSS are close, but not quite so

Let me summarise the main elements of MPEG drivers to develop standards and software that implement them:

The question is not meaningful if we do not specify the context in which the standard or software is used.

I am sure that some will think differently on the subject of the previous section and I will certainly be willing to engage in a discussion.

I believe that Open Source Software is a great movement that has brought a lot to humankind. However, I do not think that it is adequate to create an environment that respond to the 7 drivers above.

Why MPEG is part of ISO/IEC

Can you “clone” MPEG?