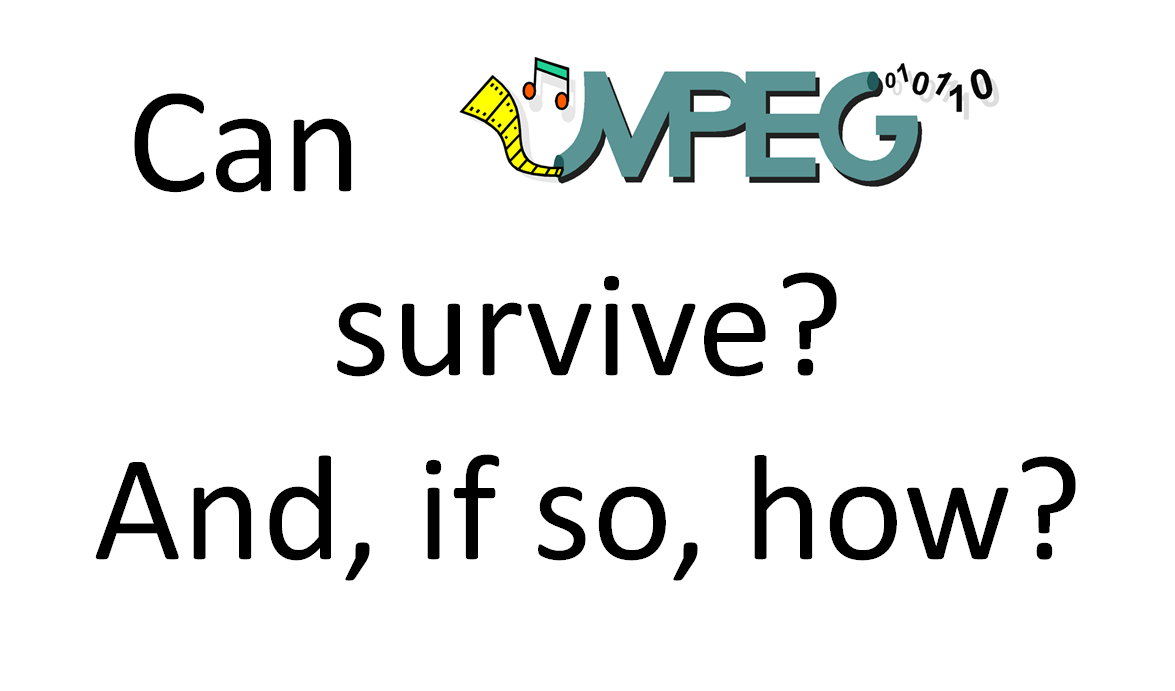 Human beings and organisation that result from human endeavours are complex living organisms that live and expand because they have internal forces driving their development. Both types of organism, however operate in environments populated by other organisms which variously affect them.

Today 7.5 billion human organisms are under the threat of Covid-19 viral pandemic that is taking a terrible and growing toll of deaths and economic hardships. Organisms created by human, too, are subjects to the influence of other organisms, some operating synergistically and some antagonistically. MPEG is no exception.

This article will explore the state of health of the MPEG organism and its chances of survival.

What is driving the MPEG organism

In general organisms created by human endeavours are different from one another. Their nature depends on who created them, for what purpose, in which environment etc. MPEG, I must say, is probably more different than most.

MPEG was created to give a chance to the use of video compression in products and services, as video communication had proved not to be an attractive business proposition. It started (MPEG-1) as a mix of Telecommunication and Consumer Electronics, two industries who did not have, 30 years ago, much to share business-wise. This original mix explains why MPEG standards have rigorously a normative conformance testing specification without any associated authorised testing laboratory.

With MPEG-2 broadcasting concurred to shaping the MPEG organism and, with MPEG-4, IT joined and shaped MPEG. The miracle recipe is that MPEG standards have been able to satisfy the needs of industries that used to be – and now, because of MPEG, less so – oceans apart. The result has been that different industries could design products that were interoperable with those of other industries. They could access the compression technology without discrimination, independently of their belonging to a particular industry or a particular country.

MPEG expanded thanks to its business model based on the best compressed media quality at a given time at the costs of introducing a potentially large amount of patents owned by different entities. The MPEG model is radically different than the JPEG model. The two JPEG successful standards – the original JPEG and JPEG2000 – are both based on a baseline Option 1 (that people outside of ISO would call royalty free) with additional encumbered profiles.

The two elements are not sufficient to explain the wild success of MPEG standards. The third element is the lowly MPEG status. MPEG is a working group (WG), an entity not allowed to make “decisions”, but only to propose recommendations to be approved by other entities sitting above it. This is the formality, but the practice is different. The MPEG working groups has competence on (compression of) all media types (actually, even more than just “media”), is populated by Industries and Companies with a stake in media, and by Academia and Research. It identifies standards opportunities using technology as scale, but technology as handled by a large number of extremely competent experts from the industries and companies that matter.

If MPEG had been an entity above WG, it would have been driven by political considerations which would have led to project of standards aligned to the politics of the committee. This would have produced less standards, less successes, less technology and more national/industry interests.

The fourth element is that in MPEG there is no centralised decision point. It is an environment where interests aggregate around proposals that come from members. When those interests reach a certain threshold, they have the opportunity to become MPEG projects.

MPEG has the unique recipe to define technology-driven projects of standards first, adding corporate and national interests later, if they pass through the sieve of the technical requirements analysis.

MPEG is an organism living in an environment populated by other organisms. Many application-oriented standards and industry fora need compression standards for media (and other data) but understand that compression is an extremely specialised field that it would be foolish to compete with. These are the synergistic organisms, however, there are organisms who play an antagonistic role. We should not say that they are evil. Covid-19 is no more, no less evil than a computer virus displaying “I am erasing your hard disk. Nothing personal” while it destroys years of efforts embedded in your hard disk.

MPEG produces standards for the vast field for which it has competence. However, there are minor organisms who think that, if they could grab some pieces of the MPEG field, they would be able to emulate the success of MPEG standards. Of course they do not understand that a successful standard does not just depend on what the standard is about, but on the ecosystem that produces it and the paths leading to those who will use it.

MPEG has become large and exert a vast influent but, as I argued in Who “owns” MPEG? And Who “decides” in MPEG? no one has really a control of, a stake in or an influence on MPEG. This is unusual because bodies like MPEG are typically under the influence of some company or industry or country.

MPEG is an appetising morsel for any organisms out there.

It is only natural that organisms with different business models may wish to wipe out a competitor like MPEG.

The DNA of the MPEG organism has driven the expansion of MPEG beyond the traditional digital media field. MPEG has already proven that it is capable of applying its methodology to other fields such as compression of genomic data. MPEG is not new to the introduction of foreign bodies into itself. As I said above, MPEG started as an excrescence of the Telecommunication industry combined with the Consumer Electronic industry, later combined with the Broadcasting and IT industry.

So far the reaction of the MPEG immune system was suppressed, but it is not clear whether that suppression will continue to be effective if major injections of foreign bodies will continue.

MPEG has developed enzymes to cut and paste its DNA to inject new business model code, but the jury of that operation is still out.

At the risk of playing down the important successes of the past, one could say that, so far, MPEG has largely worked in known land. If we discard some “minor details”, the requirements of the VVC standard, which we all hope will be released as FDIS on the 3rd of July or another date close to it, are not so different than the MPEG-1 Video requirements. Sure, we have higher definition, higher frame rates, higher chrominance, higher dynamic range, 360⁰ and more. However, MPEG has consistently handled rectangular video. Something similar can be said of audio. 3D Graphics is offering new domains such as Point Cloud Compression. The MPEG-2 Transport Stream addressed different problems that the MP4 file format, but both are transport issues.

Immersive media is a different beast. This is technically not a new land, because MPEG has tried working on immersive visual media before. Without much success, however. Waves of new technologies come and go with new promises.

Even before the coming of the Covid-19 virus, there was a clear trend toward a comeback of country- and industry-driven standard compartments that MPEG had successfully fought by imposing its own model based on global – country and industry – standards.

The reaction of countries to the global Covid-19 threat show that countries are unable to pool common resources to face common threats. Every country is going its own way.

The MPEG organism can well die because there will be a dearth of food (i.e. proposals of new standards) because all food will go to the local organisms.

How can MPEG survive?

There should be no doubt that my preference goes to “Retain MPEG”. However, this may be difficult to realise because so many hostile organisms are acting against MPEG.

My second best is to “Clone MPEG” and let it operate in a different environment. I expect this to require a huge effort. However, things may be facilitated by the choice of the environment and by the collaboration of those who believe in the plan.

I can only define the option of “Mimic MPEG”, i.e. to develop and implement a model alternative to MPEG that works as a dream. Some people like it hot, some others like to think their dreams as reality.

“Balkanise MPEG ” is the natural consequence of the “Mimic MPEG” dream gone sour.