For 30 years industry has been accustomed to rely on MPEG as the source of standards the industry needs. In 30 years MPEG has held a record 129 meetings, roughly spaced by 3 months.

What happens if MPEG130 is not held? Can industry afford it?

In this article I will try and answer this non so hypothetical question.

At the plenary session of the previous N-1th meeting, MPEG approves the results achieved and creates some 25 Ad hoc Groups (AhGs). Taking one example from MPEG129, each AhG has a title (Compression of Neural Networks for Multimedia Content Description and Analysis), chairs (Werner Bailer, Sungmoon Chun and Wei Wang) and a set of mandates:

Work is carried out during the typical ~3 months between the end of the N-1th and the next Nth meeting using e-mail reflector or conference calls or, less frequently, physical meetings. Documents are shared by AhG members using the MPEG Document Management System (MDMS).

When the date of the next meeting approaches, AhGs wrap up their conclusions and many of them hold physical meetings on the week-end prior to the “MPEG week”.

On the Monday morning of the MPEG week, AhGs report their results to the MPEG plenary. In the afternoon, subgroups (Requirements, Systems, Video, Joint groups with ITU, Audio, 3DG and Test) hold short plenaries after which Break-out Groups (BoGs), often a continuation of AhGs, carry out their work interspersed with joint meetings of subgroups and BoGs.

Two more plenaries are held: on Wednesday morning to make everybody aware of what has happened in groups a member might not have had the opportunity to attend and on Friday afternoon to ratify or, if necessary, reconsider, decisions made by the subgroups.

The Convenor and the Chairs meet at night to assess progress and coordinate work between subgroups and BoGs. A typical function is the identification of joint meetings.

ICT at the service of MPEG

Some 500 people are involved in an MPEG week, At times some 10-15 meeting sessions are held in parallel.

Most of this is possible because of the ICT facilities MPEG prides itself of. Developed by Christian Tulvan, they run on servers made available by Institut Mines Télécom.

Currently the MPEG Meeting Support System (MMSS) includes a calendar where subgroup chairs record all subgroup and BoG sessions adding a description of the topics to be discussed. The figure below gives a snapshot of the MMSS calendar. This of course has several views to serve different needs. 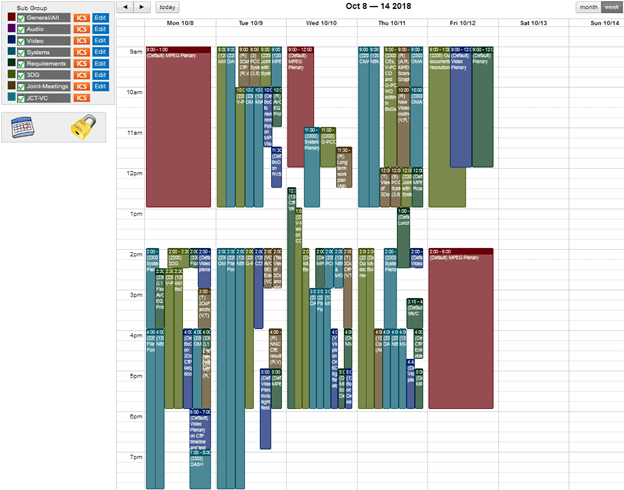 In Digging deeper in the MPEG work, I described MDMS and MMSS. Originally deployed in 1995, MDMS has been one of the greatest contributors to MPEG’s skyrocketing rise in performance. In addition to providing the calendar, MMSS also enables the collation of all results produced by the galaxy of MPEG organisational units depicted below. 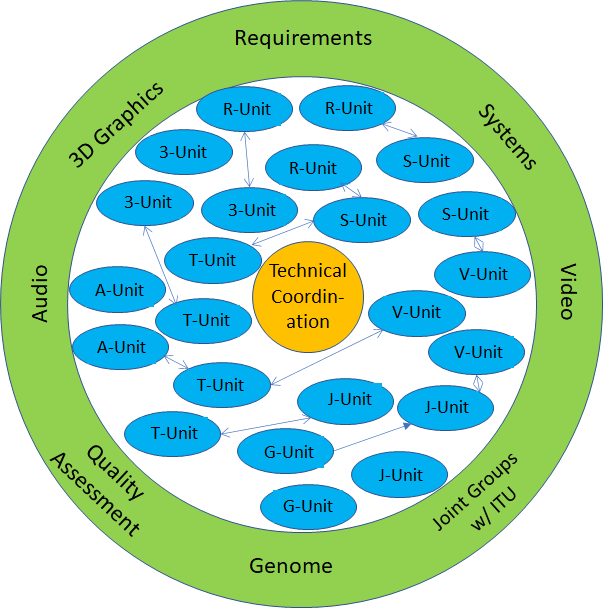 The third ICT support is the MPEG Workplan Management System (MWMS). This provides different views of the relevant information on MPEG standards that is needed to execute the workplan.

Now imagine, and probably you don’t have to stretch you imagination too much, that physical meetings of people are banned but industry requests are so pressing that a meeting must be held, no matter what, because product and service plans depend so much on MPEG standards.

MPEG is responding to this call of duty and is attempting the impossible by converting its 131st (physical) meeting of 500 experts to a full online meeting retaining as much as possible the modus operandi depicted in the figures above.

In the following I will highlight how MPEG is facing what is probably its biggest organisational challenge ever.

The first issue to be considered is that, no matter how skilfully MPEG will handle its first online meeting, productivity is going to be less than a physical meeting could yield. This is because by and large the majority of the time of a physical MPEG meeting is dedicated to intense technical discussions in smaller (and sometimes not so small) groups. At an online meeting, such discussions will at best be a pale replica of the physical meeting where experts are pressed by the number and the complexity of the issues, the argument they make, the little time available, the need to get to a conclusion and a clumsier handling of the interventions.

MPEG is facing this challenge by asking AhGs to come to the online meeting with much more solid conclusions than usual so that the results that will be brought to the online meeting will be more mature and will require less debate to be adopted. This has generated a surge in conference calls by the groups who are more motivated by the need to achieve firm results at the next meeting.

Another way to face the challenge is by being realistic in what is achievable at an online meeting, Issues that are very complex and possibly less urgent will be handled with a lower priority or not considered at all, of course if the membership agrees. Therefore the management will set the meeting goals, balancing urgency, maturity and achievability of results. Of course experts, individually or via AhGs, will have an opportunity to make themselves heard.

Yet another way to face the challenge is by preparing a very detailed assignment of time slots to issues during the entire week in advance of the MPEG week. So far this was done only partially because MPEG allowed as much time as possible to experts to prepare and upload their contributions for others to study and to be ready to discuss at the meeting. This has always forced the chairs to prepare their schedule at the last minute or even during the week as the meeting unfolds. This time MPEG asks its experts to submit their contributions one full week before with an extended abstract to facilitate the task of the chairs who have to understand tens and sometimes hundreds of contributions and properly assign them to homogeneous sessions.

The schedules will balance the need to achieve as many results as possible (i.e. parallel sessions) with giving the opportunity to as many members as possible to attend (i.e. sequential sections).

The indefatigable Christian Tulvan, the mind and the arm behind MDMS and MMSS, is currently working to extend MMSS to enable the chairs to add the list of documents to be considered and to create online session reports shared with and possibly co-edited by session participants.

No matter how good the forecast will be, It is expected that the schedule will change while the week progresses. If a change during the meeting is needed, it will be announced at least 24 hours in advance.

The next big challenge is the fact that MPEG is a truly global organisation. We do not have Hawaiian experts in attendance, but we do have experts from Australia (East Coast) to the USA (West Coast). That makes a total of 19 time zones. Therefore MPEG130 online will be conducted in 3 time slots starting at 05:00, 13:00 and 21:00 (times are GMT). The sessions inside will have durations less than 2 hours followed by a break.

Last but not least. MPEG is confident that the current emergency will be called off soon. The situation we are facing, however, is new and we simply don’t know when it will be over and if it will be for once or if this is just the first of future pandemics.

With MPEG130 online, MPEG not only wants to respond to the current industry needs, but also to fine tune its processes in an online context to be always ready to serve the industry and the people industry serves, no matter which are the external circumstances.

I don’t underestimate the challenge MPEG is facing with MPEG130 online, but I know I can rely on a dedicated leadership and membership.

What is MPAI going to do?