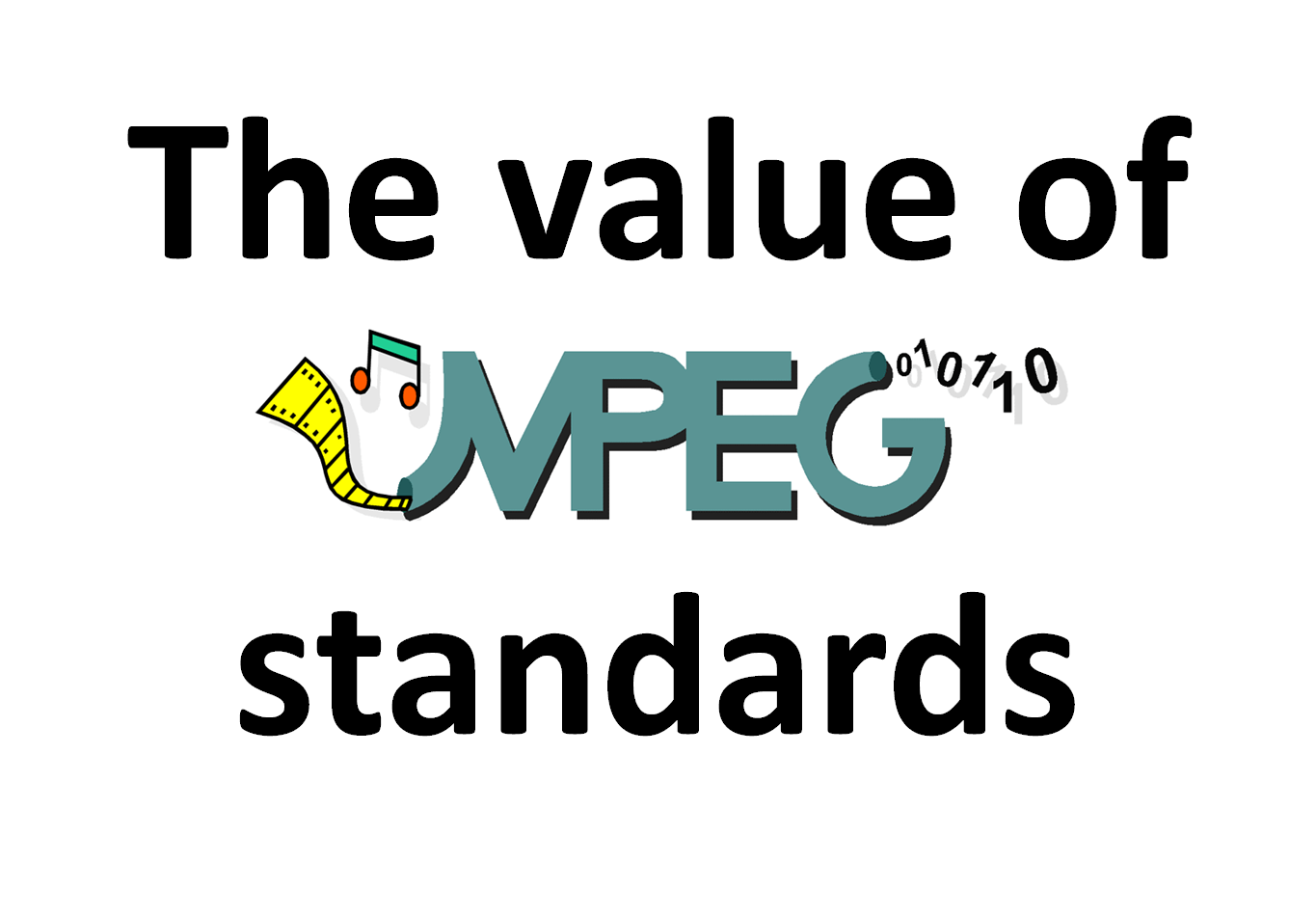 MPEG can certainly be proud of the valuable standards it has produced: MPEG-1, MPEG-2, MPEG-4 AVC, MPEG-4 File Format and, more recently HEVC, MMT, DASH and many more.

Why are MPEG standards valuable and what can we do to add more value to them?

Why are MPEG standards valuable?

There is no single answer to this question. So, let’s analyse the causes that make MPEG standards valuable. While we are at it. later we wik let’s also analyse why some standards. on which great hopes were laid, did not deliver.

The standard was designed for what would be the first device handling digital media, was interactive and and would serve the telecom and Consumer Electronics (CE) markets. Eventually that device did not fly, but the technology that made it possible was later reconfigured to make a “lower class” DVD player. Success was incredible, with a total of 1 billion devices manufactured by many companies.

MP3 turned out to be an incredible success from a totally unexpected quarter. When MPEG-1 was approved in 1992, MP3 offered transparency at 192 kbit/s for stereo music, ¼ less than MPEG-1 Audio layer II at 256 kbit/s (MP2) and at ½ of the MPEG-1 Audio layer I bitrate of 384 kbit/s (MP1). Complexity, however, was daunting (at that time). While MP2 and MP1 were implemented in ICs for mass market products, in the first years MP3 was implemented with sparse logic for professional equipment. Until, I mean, the impossible happened: software implementing the MP3 decoder in real time on a PC became available, non-real time encoding software became available, ripping a track from a CD became an OS feature of the PC and RIO became the first portable MP3 player with the size of a deck of cards. Most importantly a US court ruled that the RIO player was an IT, not a CE device.

With MPEG-G MPEG is taking the shot by addressing a conceptually similar situation as music tracks on CD converted to compressed digital 20 years ago. MPEG-G can potentially make the output file of a sequenced DNA “liquid” because it reduces a file of a few un-processable terabytes to a few tens of processable gigabytes. The difference is that the file of a sequenced DNA is a professional object, even though it can be produced in billions of instances and thus it looks like a consumer object.

MPEG-2 was a planned success. The early 1990s was a case of Brownian motion where particles (companies) were scrambling to come out with a new generation of TV. Japan with its MUSE and Europe with its HD-MAC were analogue by definition, and the USA put some order in its industrial activities with the Grand Alliance. However, all manufacturing companies, already global at that time, pushed for a digital solution. MPEG, the new kid in the block, announced it would develop a digital television standard and did so. The world followed.

There is much to learn from MPEG-2 because it is a standard that addressed the common needs of broadcasting industries – terrestrial, satellite, cable and package media – that until that time did not have much in common, if not the television experience eventually delivered to the end user. MPEG-2 was the catalyst of media industry convergence.

The development of the MPEG-2 4:2:2 profile was a natural follow-up and one that was constantly implemented in the video coding standards following MPEG-2 (including MPEG-4, RGB etc.). The 4:2:2 profile was a step itoward another industry – production – that has never been entirely fascinated by the MPEG offers.

MPEG-4 was the project that was meant to provide digital audio and video for yet another customer, the IT industry, actually the ICT industry, because video – and audio – for mobile was an important target from early on. BIFS had as foundation the Virtual Reality Modelling Language (VRML), a specification of the computer graphics world. MPEG extended VRML to support efficient transmission and real time. BIFS did not fly, and VRML, too, did not fly. Fascination with XML prompted both MPEG and VRML to introduce XMT and X3D, respectively. But success did not come. A later specification developed by the Korean Digital Media Broadcasting (DMB) made use of a relatively small portion of BIFS for complementary low bitrate services to digital audio broadcasting.

BIFS is an example of how commonality of technology between two radically different industries can well lead to no synergy. The origins of computer graphics are rooted in professional users using packaged content. The intended users of BIFS were consumers using real-time content via the network. The battle for the introduction of the technology was fought independently (it could hardly have been otherwise). Unfortunately, it was lost – independently.

MPEG learned that you cannot develop a standard in a top down fashion. Vision is needed, but vision must constantly face reality.

MPEG-4 Visual inherited the vision of 2D visual objects in a 3D space. MPEG-4 Visual was a standard that supported moving 2D object in addition to extend the performance of MPEG-2 Visual. Industry needed the standard to enable services on the web and mobile. The hopes of a licence of MPEG-4 Visual patents were dashed when the licence included a charge based on the time an MPEG-4 Visual decoder was used.

MPEG-4 Visual was the sacrificial lamb that allowed MPEG-4 AVC to get a better deal in the use of relevant patents. Higher compression and acceptable licencing terms made AVC the universal video codec that it still is today.

The MPEG Audio fortunes have different stories to tell. MP3 was and is an outstanding success. MP2 has been a good success and MP1 had a short span of use in the Digita Compact Cassette. MPEG-2 Audio did not have many takers because the performance was not adequate in a multi-channel environment. MPEG-2 AAC is in use in some countries. More importantly, MPEG-2 AAC it paved the way to MPEG-4 AAC.

MPEG-4 AAC is an outstanding success, with probably 10 billion devices in current use for all sorts of applications. Why? One element is the performance of the technology, another is the choice made by Apple to base their web-based music distribution service on MPEG-4 AAC. Yet another is the continuous performance improvement that has delivered MPEG-4 HE-AAC v2.

OFF is a great example of standard development not for an industry forum but for a group of companies who had developed a successful specification that they were no longer keen on maintaining. In a sense, still, that was a request from an industry, conveyed by a National Body, that MPEG gladly accepted. OFF is now an extremely successful standard. This success is not entirely of MPEG’s doing, but the amount of extension MPEG has added to the original OpenType specification is such that MPEG can say that OFF is an MPEG standard of great success.

MMT is an example of a solution that answers the questions that many (terrestrial) broadcasters ask: how can I face the competition of services on the web? The answer could have been strengthening broadcast delivery with some magi. Instead MMT offered the means to move broadcasting services, if not to the web, at least to the transport technology that enables the web . In this way it becomes easy to integrate broadcasting services with interactive services. The standard is deployed in several important countries, but acceptance of MMT is not universal. Why? Broadcasting is a conservative world and highly influenced by political considerations. Interestingly, streaming services that use MMT can offer short delay. However, there is still a limited use of MMT for streaming services.

HEVC continues the tradition of MPEG Video compression standards in terms of technical achievements. The HEVC Verification Tests showed that on average HEVC delivers the same quality as AVC with 40% of the bitrate required by AVC. MPEG’s traditional customers have jumped on HEVC which is widely deployed in their devices and services. A concern is the low level of adoption in online services which is rated at ~12%.

This standard, part of the MMT and HEVC package in MPEG-H has been adopted by several broadcasting agencies. Its use has been announced by other industry sources also for distribution of high quality immersive audio via the web.

DASH is a remarkable example of how MPEG is able to respond to the need of a client industry, in this particular case 3GPP, representing the mobile telecommunication industry. MPEG developed DASH with a close connection with 3GPP. Since the standard has been developed, DASH has seen a broad acceptance by the industry.

The incomplete summary above shows that MPEG can develop high quality standards, the best in terms of performance in its area of work. Its standards do respond to industry requirements thanks to MPEG’s network of liaisons with the relevant client industries.

Unfortunately, this is no longer sufficient today. The HEVC case shows that MPEG should not only be able to deliver high quality standards but also that its users can access the technology. MPEG has no place in discussions about licensing, but it can operate to create the condition for easier licensing to happen,

A possible way forward is shown by the recently released MPEG-5 Essential Video Coding (EVC) standard. EVC offers improved compression efficiency compared to existing video coding standards (HEVC and its competitors) and relies on the statements of all contributors to the standard who have committed to announce their licensing terms no later than two years after the FDIS publication date.

Another route that will add value to MPEG standards is the acknowledgment that media technologies get more and more intertwined with other technologies present in media devices or relied on by media services. MPEG should be open to embrace more collaborations with other bodies and to develop joint standards, Far from being a limitation of MPEG’s role, this is an enhancement because MPEG standards will be able to reach more communities and hence more customers.

Ditto for the trend that MPEG has initiated some years ago to develop compression standards for data other than media. The collaboration with ISP TC 276 Biotechnology in the area of compression of reads from high speed sequencing machines has produced 5 parts of the MPEG-G standard. MPEG-G shows that MPEG compression technologies, developed for media, can be adapted to compress other data as well.

The MPEG to Industry Hall of fame

A vision made real – Past, present and future of MPEG